The Simmons girls, both of whom are avid equestrians, engineered a mechanism that dispenses bronchodilator medication while the horse is being ridden. Because the rider is not required to return to a stable and dismount before administering medication, this system has a broad range of applications, Emma and Sarah explained, including mounted law enforcement who use horses for urban crowd control, farming and ranching, and horse event competitions. 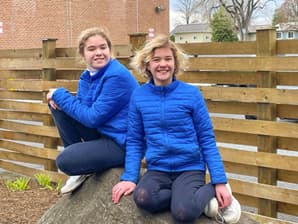 In addition to the County Science Fair prizes, the Simmons students were acknowledged with several industry-sponsored awards including the Broadcom Masters top prize. This makes them eligible to compete in the national Broadcom Premier Middle School Science, Technology, Engineering, and Mathematics Competition held in Washington, DC in the fall of 2022. Nominees for this by-invitation-only competition are chosen among the top 10% of the 6th, 7th, and 8th graders nationwide.

Emma and Sarah, the daughters of Dr. Jeffrey A. Simmons and Dr. Lisa S. McLeod-Simmons, both university professors, were also presented with the Hively Family Inventor Award and the Lemelson Early Inventor Prize at the Frederick County science competition. Emma, who is interested in veterinary medicine, and Sarah, who wants to follow her grandfather and uncle into an engineering field, both expressed how honored they were to receive these awards.

When asked how they came up with such a unique project, Emma and Sarah explained. “We’ve been riding for about 3 years now and one of the horses we ride has asthma. The horse is named Wesley and he is a beautiful thoroughbred. When we ride him sometimes he has difficulty breathing, “ Emma said. Her sister, Sarah, continued, “Our riding coach gives Wesley steroid shots to help prevent the asthma attacks. These work, but not always very well and there are side effects. And the nebulizer requires that the horse be in the stable where there is electricity for the nebulizer pump and the horse can be kept still while he’s wearing the inhaler mask. And like most horses, Wesley does not always wait to stay still.”

The girls said that when their science teacher at Mother Seton School, Danielle Kuykendall, told their science class that they would all need to develop a science project for the school Science, Technology, Engineering, and Mathematics (STEM) fair, their thoughts turned to their horse. Emma said, “If we are out on a ride and the horse has an asthma attack, it’s hard to get back to the barn and it’s not always very easy or safe to just stop, get off the horse, give him a shot, and then wait 30 minutes.” Sarah noted, “We knew there had to be a better way of making sure the horse we ride is healthy and that he and we are safe when we ride.”

Several months later and after some experimentation, they had developed a way to administer medication for equine asthma from the saddle and without having to take the horse back to the barn. Emma and Sarah both said that their parents were a great help and that their riding coach, Mike Hillman of Emmitsburg, and his horse Wesley were inspirations for them. They also had high praise for their science and math teachers at Mother Seton School, Danielle Kuykendall and Sharon Beard.  “It’s amazing how much the math and science we learned in school helped us,” Sarah said. “Our teachers are the absolute best in the world,” Emma added.

The STEM Fair was held Saturday, April 2. More than 75 judges from the area reviewed dozens of projects entered by 86 students from 17 schools across the county.