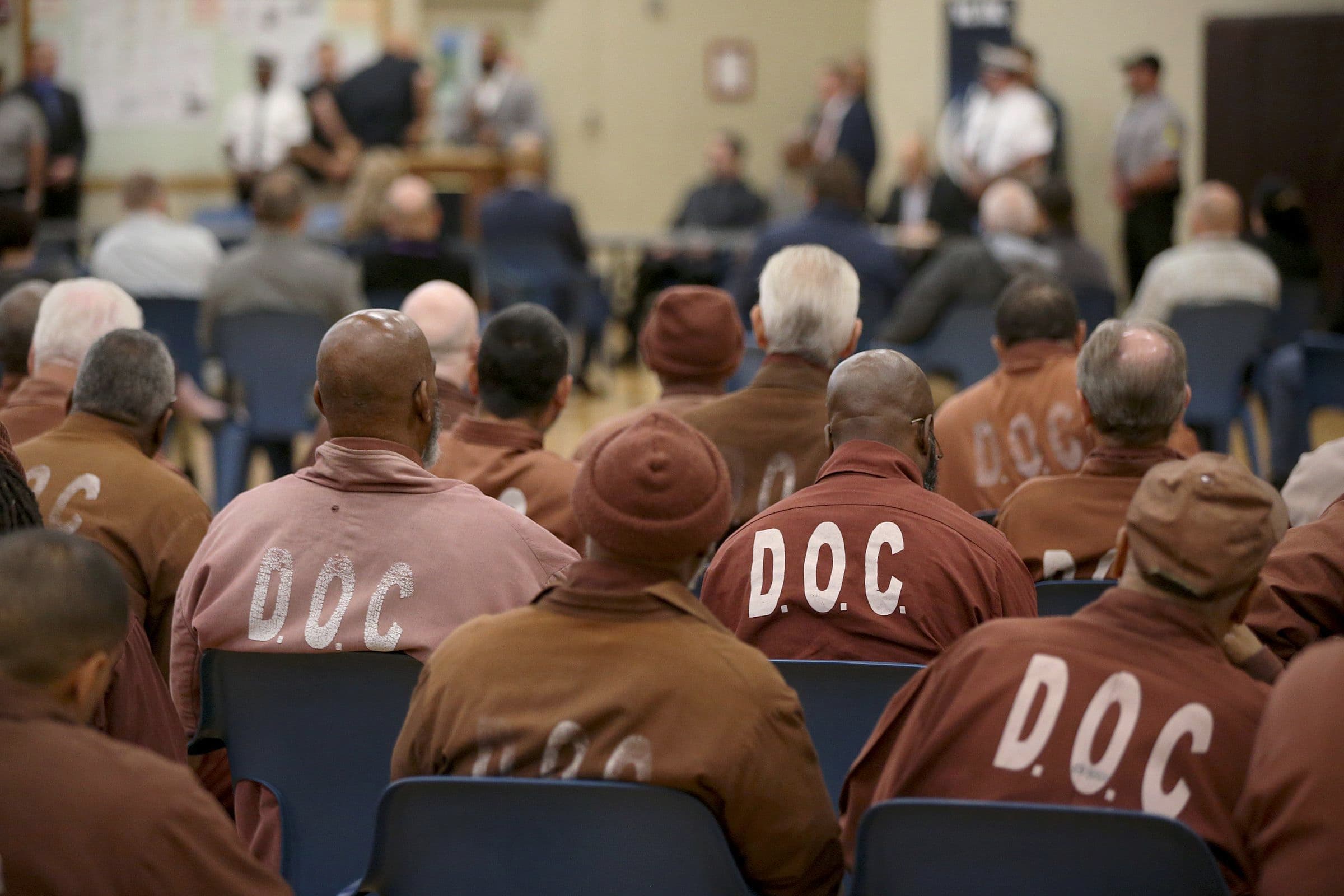 HARRISBURG — More than two years after the first coronavirus cases were reported in Pennsylvania state prisons, some of the mitigation measures Gov. Tom Wolf’s administration implemented to cut down on the spread of COVID-19 are still in place.

But with nearly 90% of people held at state prisons vaccinated and cases significantly down, both incarcerated people and their advocates are asking the Department of Corrections to reassess restrictions that sacrifice quality of life and add financial hardship.

The coronavirus hit Pennsylvania state prisons in late March 2020, sending the system’s 23 prisons into quarantine. Extreme restrictions on movement kept people in cells and largely uninfected through the spring. But more contagious permutations of the virus overwhelmed the tight restrictions.

State prisons saw waves of infection and death from November 2020 to January 2021 and again the following winter.

More than two years into the pandemic, 166 incarcerated people and 12 corrections staff have died from the virus, according to the corrections department. Since January, large waves of positive COVID-19 cases have largely subsided.

Anticipating prisons would become a COVID-19 hotspot, Gov. Tom Wolf signed an April 2020 executive order that allowed for the release of nonviolent incarcerated people with a higher chance of severe illness if they caught the virus. His unilateral action responded to a Republican plan that would have limited the number of releases to roughly 450.

State officials identified 1,200 people who might fit the governor’s narrow criteria, but ultimately only 159 were released between April and June 2020. Some people initially identified as potential candidates didn’t complete drug and alcohol program requirements, or had violence in their recent history. Others were disqualified when they didn’t have a plan for where to stay while out on reprieve. Some chose to wait for parole instead of participating.

Of the 159 granted reprieve, 61 have returned to prison for various reasons, including violating the terms of their release, and one person died, said Department of Corrections spokesperson Maria Bivens.

At a February budget hearing, Corrections Secretary George Little told legislators none of the people who returned did so for the same offense that initially sent them to jail, nor had any committed violent crimes during their release.

“Typically, it was technical issues,” he said. “For instance, they were reprieved at a particular location and they weren’t at that location. If they didn’t report as directed they were brought back.”

Two people returned for mental health issues, Little added. “Frankly, they destabilized when they were in the community. We brought them back because we were able to more adequately care and track them while they were inside the institutions.”

The remaining 97 people who were part of the reprieve program received commutations from Wolf last year.

At the beginning of the pandemic, the Department of Corrections moved meals from group dining halls to in-cell delivery.

Four facilities — Cambridge Springs, Laurel Highlands, Muncy, and Quehanna — have returned to group dining or are in the process of returning. But in the majority of state prisons, even as the number of COVID-19 cases has declined, people still eat their daily meals in cells.

In certain prisons, getting rid of three group meals daily has freed up time and space for more out-of-cell activities, Bivens said.

“Each facility is different and there is no ‘one size fits all’ solution,” Bivens wrote in an email. “The [Department of Corrections] will continue to assess best practices for each facility and adjust meal delivery as appropriate.”

A March survey of 429 people at 23 state prisons by Pennsylvania Prison Society, which advocates for people in state prisons, found 62% of respondents would prefer to return to dining hall meals. Eating in a cell eliminated the opportunity to walk and socialize, respondents said, and reduced the number of hot meals.

“Hot meals have been reduced to cold substitute — grilled cheese is now cheesed sandwich; pancakes are now a third hard-boiled egg breakfast,” wrote a person jailed at Albion. “Breakfast(s) are usually already sitting on the block at count time — over an hour before they’re served.”

People in Pennsylvania prisons pay a $5 copay when they request medical attention for something that isn’t an emergency or treatment for a chronic condition.

During the height of the pandemic, the corrections department suspended copays for people reporting flu-like symptoms associated with COVID-19. But implementation was spotty and advocates pushed for a full suspension, which went into effect in May 2021.

The department has since returned to charging a copay for elective medical needs, with an exception for flu-like symptoms. During the suspension, calls for medical attention increased, resulting in delays in care and more complaints about wait times, Bivens said.

But the Pennsylvania Prison Society still advocates for a permanent suspension, as people incarcerated in Pennsylvania make about $.19 an hour, if they have a job at all.

“The department seems to take the position that instituting a copay cuts down on spurious sick calls,” said Noah Barth, the prison monitoring director for the Pennsylvania Prison Society. “While that may be true, it cuts back on legitimate sick calls as well.”

Pennsylvania prisons suspended all in-person visitation in March 2020 to cut down on the number of people from the outside who could potentially bring the virus into facilities.

During the visit pause, people in state prisons could contact friends and family via free video calls, which were not available before the pandemic.

In-person visits returned in May 2021, but the corrections department suspended them again in January after a new wave of COVID-19 outbreaks. Visits resumed in March with restrictions on days and times.

Before the pandemic, visitors could arrive at a prison with no notice. Now, the corrections department requires them to schedule visits at least three days in advance, Bivens said.

“This allows us to promote social distancing in the visiting rooms, maintain zone integrity, and ensure visitors have enough time with their incarcerated loved ones,” she said. “Previously, on busy days, the length of a visit may have been limited to allow the next group to come in.”

State prisons implemented “zones” during the pandemic, a system Little called a “jail within a jail,” in order to limit the spread of coronavirus. The size and number of zones vary by prison, but in theory, people can only interact with those in the same zone.

Days and times for in-person visits are now assigned by zone, potentially giving less flexibility to visiting friends or family members who might need to make extra accommodations to be available, Barth said.

“Increasingly, what we heard is that people feel the utility of the zone system has passed,” he said. “The pandemic is on the wane and vaccination is high. It just becomes another way to divide the population. In some cases, they already mix across zones for work.”

The permanent addition of video visitation has allowed family and friends to see their incarcerated loved ones without the need to travel, Bivens said.

“While we cannot guarantee that the in-person availability of each inmate will align seamlessly with the schedules of every visitor, we believe that the scheduling system protects the health and safety of visitors, staff, and the incarcerated population,” she said.

The Wolf administration provided an incentive for people in prisons to get vaccinated: a $25 commissary credit, a significant amount equivalent to more than 130 hours of work at prison jobs paying $0.19 an hour.

Wolf also mandated vaccination against or testing for COVID-19 for state employees working in congregate settings, including prisons. In response, the union representing most guards in Pennsylvania state prisons sued the state in September, but the Commonwealth Court dismissed the complaint in October.

Different prisons have provided incentives for staff to get vaccinated, but uptake among corrections employees remains low, according to numbers self-reported to the Department of Corrections.

“We are hopeful all staff will choose to be vaccinated to protect themselves, their coworkers and families and our inmates,” Bivens said. “Secretary Little has emphasized that getting vaccinated is a personal choice and he will not make vaccinations mandatory.”

While 88% of inmates are vaccinated, that number drops to only 49% among prison staff.

While the corrections department provided incentives for incarcerated people to get vaccinated, it also limited activities for those who didn’t, Barth said.

“There was a strong sense among a lot of people of feeling coerced. It felt unfair or disingenuous,” he said. “They couldn’t go to work or do other things when they know many of the officers without a mask are unvaccinated themselves.”

Despite high vaccination rates among Pa. prisoners, some COVID restrictions remain in place

by Spotlight PA, Gettysburg Connection
May 17, 2022