No tax increases were included in the Fairfield Area School District’s proposed budget during the school board’s meeting on Monday evening.

The board held two back-to-back meetings, first holding its regular meeting, then going into a budget work session. 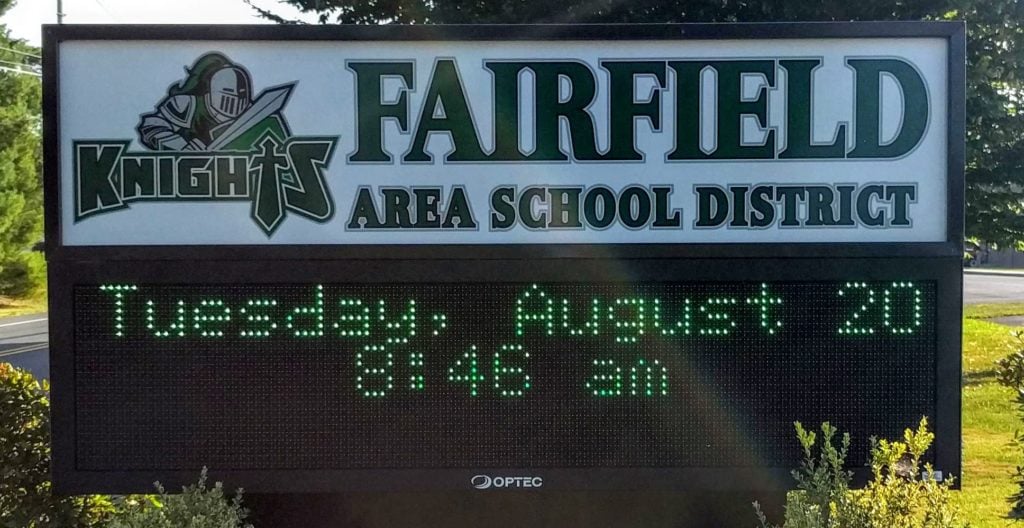 Tim Stanton, the district’s new business manager, presented the draft budget to the board.

Stanton explained that the budget was created using anticipated revenues and expenditures with little wiggle room in the line items.

“There’s no padding in the budget, no surpluses built into the budget,” Stanton said. “And when you budget for what you think the actual revenue is going to be and what the actual expenditures are going to be, potentially you may have some surprises with some negative variances of things that come up that are unexpected at this time of year that will surface six months from now. And so to handle that, I traditionally put in a budget contingency built into the budget.”

“It’s not intended to be a slush fund that people can just go to,” Stanton said. “It’s for those unexpected circumstances, and to pull stuff from the contingency, you have to get permission from the superintendent to do so.”

The district can raise its millage rate and bring in an extra $381,627, with the average taxpayer paying about an extra $70, but Stanton said he wasn’t requesting a tax increase for the 2022-23 fiscal year budget. Last year the increase was 2.08%.

The FY 22-23 budget includes the original $2.3 million in estimated earned income tax revenue. It also adds an extra $79,952 of anticipated additional real estate taxes thanks to the assessed property values increasing by $7.7 million. It will all come together to equate to a surplus of about $188,955, according to Stanton.

The budget also includes the third round of ESSER (Elementary and Secondary School Emergency Relief) funding, which amounts to $408,470.

Along with Superintendent Thomas J. Haupt, Stanton recommended raising school meal fees to have a rate closer to that of districts in Adams, York and Franklin counties.

Breakfast at the elementary school currently costs $1.25. Middle school and high school students do not have a school-provided breakfast.

According to Stanton, his queries to other nearby districts revealed that they average a rate of $1.46 for breakfast.

Stanton suggested that the board increase the elementary breakfast fee from $1.25 to $1.45 and begin offering it to middle and high school students. He said that within the districts he communicated with, it was “atypical” for schools to not provide breakfast to high school and middle school students.

Stanton said he wants to learn if students would be interested in a “grab and go breakfast” they could take to their first period classroom. Not offering breakfast to the older students is “kind of leaving money on the table,” Stanton said.

Raising the amount of students eating breakfast would boost the amount the district is reimbursed for meals from the Pennsylvania Department of Education and the district would receive more in subsidies for free and reduced meals.

Stanton suggested that the district charge $1.55 for middle and high school students’ breakfasts to be close to the average of $1.54, with adults paying $2.

Haupt also asked the board to consider the suggestions to help cover costs and because the free meals offered for all students by the state will end on June 30.

“During COVID, remember: Every meal that we serve, it is being reimbursed from the state at the free rate, and you see that that is the highest reimbursement that we get from the state,” Haupt said.

Stanton said the extra reimbursements will result in a profit for the district’s food services this year that will be hard to match next year once the program returns to normal after June.

According to Thomas and Haupt, the district used to raise prices about $0.10 per meal per year, but there have been no increases since 2016. Haupt said administration would likely recommend raising the prices again next year as the district continues to catch up to its neighbors.

The board plans to vote on the proposed budget during its next meeting on May 23, then adopt a final budget on June 27.

Each pavilion will be set by a playground, one for older children and one for younger children. The largest will be installed by the older kids’ playground.

Eventually, Gomba said the PTO hopes to add up to 10 picnic tables for the pavilions, but she did not have a firm date as the pavilions have not yet been constructed.

“Thank you to all of the parents, too, for all of the fundraising this year, as well, because that got us a lot of support with this,” Gomba said.

“And again, just a great recognition for our kids who have really overcome a lot in their lifetimes and have really displayed a lot of resilience, so a credit to those kids,” Haupt said.

The board announced that it held executive sessions on personnel and legal matters on April 27, May 2 and May 4.

The next regular meeting will be held at 7 p.m. Monday, May 23. Meetings are held in the district board room and are livestreamed on the district’s YouTube channel.

by Imari Scarbrough, Gettysburg Connection
May 12, 2022