After a detailed analysis of the future finances of the Gettysburg Area School District, School Superintendent Jason Perrin proposed the school board of directors adopt a .75 percent tax increase he said was necessary to avoid financial problems in the future.

A majority of the school board members disagreed, saying no tax increase was necessary.

The .75 percent increase was slightly less than Perrin had proposed at the last meeting two weeks ago. The current proposal excluded three new health and security positions that had been considered by the board at that meeting.

Perrin said with the proposed .75 percent tax increase $4.2 million from the reserve fund balance would have to be used to meet expenditures in 2020-21, leaving eight percent of the budget in the fund balance.

Perrin said with a zero percent tax increase $4.4 million from the reserve fund balance would have to be used to meet expenditures in 2020-21, leaving less than eight percent of the budget in the fund balance.

Perrin said he was uncomfortable depleting the fund balance in the current situation saying the balance can be quickly depleted over only a few years. My goal is to “help the district be in a position to do things when we feel they are needed,” said Perrin.

Perrin said having a healthy fund balance also improves the district’s bond rating, “Even a couple of tenths of a percent on borrowing can save the taxpayers money,” said Perrin.

Perrin said about $550,000 received this year from the Federal [Coronavirus Aid, Relief, and Economic Security Act] CARES Act would not be available next year.

Perrin showed the board the following table indicating the annual tax increase for properties of different assessed values, saying the annual increase would be $21.28 for the average property owner. 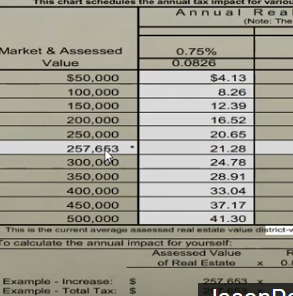 Perrin said his goal was to have similar small tax increases each year. “I don’t want to do a zero this year and come back with a 2.4 percent increase next year,” said Perrin.

“Next year could be the type of year where you have multiple variables coming together to create some challenges,” said Perrin. “I feel a great deal of responsibly; I don’t take it lightly.”

“I also feel a great deal of responsibility and that is to the taxpayer. I feel this new proposal is unacceptable and clearly not reflective of our current crisis. We’re actually in a really good position,” said board member AmyBeth Hodges. “This is so irresponsible and I’m absolutely opposed to this.”

“People are looking to us to allow some lenience. It might be $20 but tell that to somebody who’s going to the food bank. The tax increase is an insult to the people we’re supposed to be representing. I’m furious,” said Hodges.

“It’s going to be a tough sell to the taxpayers,” said board member Michael Dickerson.

“There are probably a lot of people who haven’t been working, who aren’t working, who lost their jobs and don’t know when they’re going back. It might be $21 but they’re going to be taking six to eight months to a year to catch up and then to add another $21 is not a good idea,” said board member Tim Seigman.

“I’m well aware people are suffering. The timing is horrible,” said board president Kenneth Hassinger. “I’m not for it. We’re going to find ourselves in a very difficult position down the road. We’re going to have to make some hard decisions.”

“I’m much more in favor for a zero percent tax increase,” said board member Sylvan Hershey.

Perrin said he would bring a new recommendation to the board at their next meeting in two weeks.

In other business, the board voted that Kathleen Pratt continue as board treasurer for the 2020-2021 fiscal year.

“We went from doom and gloom to being very successful. Adminstration, teachers and staff, hats off to them,” said Hassinger.

Lusk said the feedback on the ceremonies from parents and students had been very positive. “Every graduate deserves a special ceremony,” said Lusk.