Gettysburg College’s It’s On Us campaign jumped out of the gates with a roar thanks to the support and engagement of each varsity athletic team on campus.

More than 1,000 students and staff across Gettysburg’s campus signed the It’s On Us Pledge to prevent sexual assault. The majority of those signatures came from the 600-plus student-athletes making up the College’s 24 intercollegiate varsity athletic programs.

“The It’s On Us Campaign is all about bringing the campus together to recognize that everyone plays a role in preventing any type of interpersonal violence,” said Title IX Director Amanda Blaugher. “It was amazing to see all of our athletic teams coming together to sign the pledge and commit to their role in preventing sexual misconduct and relationship violence.”

The initiative was powered by the Student-Athlete Impact Leader (SAIL) program, which is made up of passionate and dedicated student-athletes from across the breadth of the athletics department who want to invest in the education of their peers and help them grow physically, mentally, emotionally, and socially in and out of the competitive environment. SAIL members spread the message to get involved to their teammates and helped ensure a successful opening week as the institution engages in Domestic Violence Awareness Month.

“It was on SAIL to bring all the athletes together to take part in this initiative,” said senior baseball player Shane Manieri (Harleysville, Pa./La Salle College Prep), who serves on SAIL’s Executive Committee. “I think that goes to show that SAIL has a really big impact on our campus and that it has the potential to reach out to each and every student, regardless if they’re a student-athlete or not, and come together for a good cause.”

Founded in 2014, the mission of It’s On Us is to build the movement to combat campus sexual assault by engaging all students, including young men, and activating the largest student organizing program of its kind in grassroots awareness and prevention education programs. More than 452,000 people across 275 campuses have signed the pledge.

Earlier this year, Gettysburg College became one of 37 institutions to receive the It’s On Us PA Grant, which provides $30,000 to be used through May 2022 to increase educational efforts on campus for awareness and prevention programming. The funding paved the way for increased activities across campus and free giveaways to students, including Nalgene bottles and t-shirts with the Gettysburg-branded “It’s On Us” logo.

Additionally, athletics staff worked closely with the Title IX Office to procure speaker Kyle Richard, a former SUNY Cortland football player who was shot while trying to prevent an incident of sexual violence. Richard has spoken to campuses across the country about his experience and the importance of being active bystanders against interpersonal violence. He has received a multitude of awards for his actions, including the Football Writers Association Orange Bowl Courage Award, The Institute for Sport and Social Justice Courageous Student Athlete Award, and Joe Biden’s Its On Us Courage Award.

Richard presented his story to about 70 representatives from the athletic department in an intimate setting inside the Atrium Thursday afternoon. The former linebacker, who noted Gettysburg as one of his initial college choices, recounted his tale battling physical and mental abuse, dealing with the trauma surrounding his incident of gun violence, and eventually getting the help he needed to overcome his trauma and become a leading activist against sexual violence on college campuses. 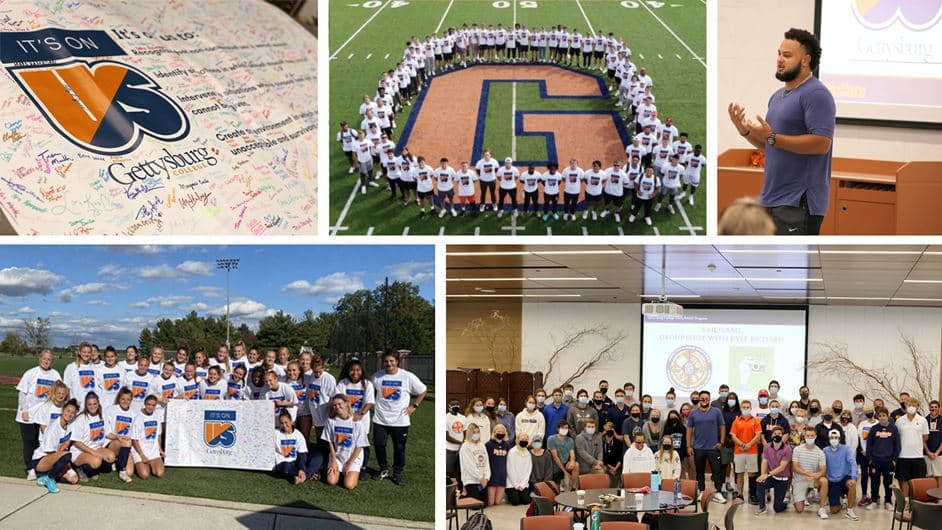 “I definitely think that sitting here with everyone in SAIL, it was really exciting to hear his story and hear what he was talking about,” said senior swimmer Megan Wojnar (Bridgewater, N.J./Bridgewater-Raritan). “It’s a way to get these topics like sexual assault, sexual violence, gun violence, domestic violence out in the open. Otherwise it’s a little hard and uncomfortable to bring up. It’s better to bring in someone who’s experienced it first-hand come in. That gives captains or seniors on teams an outlet and way to bring their own teammates into this entire discussion and make sure we’re all really fully understanding these topics.”

For Richard, who presented his story to more than 400 members of the community Thursday evening, seeing the engagement and research already being done on the Gettysburg campus by members of SAIL was a revelation. At the beginning of the meeting, leaders from each of SAIL’s four well-being dimensions – Physical, Social/Emotional, Professional, Community – presented research and methods for engaging in sexual violence prevention.

“I’ve been speaking to a lot of schools and a lot of athletes across the country and today, I was really able to see what it looks like when people get together and do the research on sexual violence,” stated Richard. “It’s such a hard topic, especially when you’re a college-age kid. It’s a scary topic. The fact that I came in here today and the first thing I’m hearing is about community and the physical traumas you deal with, just to get that out there and out in the open to the leaders on campus is unbelievable. I’ve never seen anything like that.”

The It’s On Us Pledge and presentation by Richard marks just the start of Gettysburg’s on-going initiatives as part of Domestic Violence Awareness Month. Additional events include a presentation on “Intersectionality and Restorative Justice” on Oct. 26 (7 p.m.), Safe Home Domestic Violence Tabling on Oct. 13, 21, 29 (11:30 a.m. – 1 p.m.), Purple Thursday on Oct. 21, Red Flag Display from Oct. 13-18, Clothesline Project on Oct. 13-19, and Empty Chair Display on Oct. 25-29.

The members of SAIL and their teammates will continue to be active participants in the upcoming events and beyond as part of the effort to build a more informed and committed campus community.

“It is certainly my hope that campus community sees the commitment that our student athletes are taking in taking such a large role in violence prevention on campus,” said Blaugher. “With all of the other work that SAIL and our student athletes are doing to engage with the programs and events that we have on campus, I am hopeful that the goals of the campaign become embedded in the student-athlete experience here on campus.”