The 2021 Adams County Community Foundation Giving Spree has become the most successful one-day giving event in the nation, bringing in $3.08 million for local charities. The donations, made to 94 nonprofits, came from 2,465 donors and 8,000 contributions. 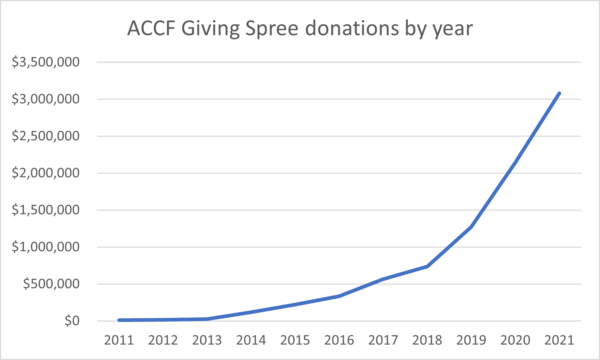 Based on dollars collected per capita, the event beat out the Lancaster PA ExtraGive event and other similar charity days across the country according to an analysis by GiveGab, a charity-based software company located in Ithaca NY.

“We can rightfully wear the crown of the most generous community the country,” said Community Foundation President and CEO Ralph Serpe.

The official results of the spree were unveiled Friday at the “Big Reveal” held at the Gettysburg Fire Hall, where donors, nonprofit organizations, and foundation staff gathered to hear the news.

The 12th annual event has grown from a small get-together with nonprofits at the Gettysburg Hotel in 2011 and turned into a county-wide extravaganza.

Serpe said the spree had been through different iterations and foci as it created its success. The original focus was on nonprofits but around 2014 the focus changed to donors and the event really took off.

Serpe said endowment donations designed to assure the longevity of the organizations made up an important part of the giving this year.

At the reveal, Serpe thanked the foundation’s “small but mighty staff” as well as the many community volunteers and sponsors who together made the event happen.

“Anything is possible if you ask,” said Serpe.

Giving Spree is most successful charity day in the nation