“When the invasion of Ukraine started I couldn’t stop watching those people; it was so sad,” said Gettysburg resident Judy Pyle. “In the case of the war, I cry. I can’t help it.”

Pyle said she had turned her artistic work to making pieces that honored Ukraine and its citizens. “It’s cathartic for me,” she said. 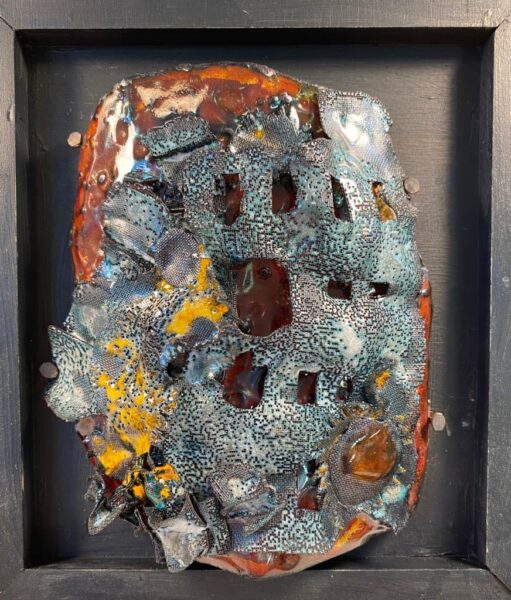 The Ukraine series includes works capturing moments during the occasion, including “Ukraine Ruins,” “Mariupol Theatre,” and “No fuel. No food. This is bullshit.”

Pyle said she’s been metalsmithing since 1998, making jewelry, including broaches and other small pieces.

The Ukraine series are enamels on copper created by applying heat, either using a torch or a small kiln in her well-ventilated basement. “They’re more like bas reliefs than sculpture. I use copper mesh and I put them all together. I put them in the kiln and they all stick together. Then I put I put a frame on them,” she said.

Pyle said she modeled the Ukraine series on a 17th Century French artist, Bernard Pallisy, who is known for his so-called “rusticware,” which features three-dimensional works with animals and vegetation in bas relief.

Pyle said she moved to Adams County when she was eight years old, attending school in the Bermudian School District and then at Saint Joseph Academy in McSherrystown. She taught art at the Gettysburg High School for over 30 years before retiring in 2006.

Pyle hopes to get the pieces into a statewide art exhibit this summer.