Gettysburg, Pa. – Sophomore Jordan Basso (Rye, N.Y./Rye) scored at the 2:40 mark of overtime on Sunday to lift No. 4 Gettysburg College to a thrilling 9-8 victory over Roanoke College in the second round of the NCAA Tournament at Clark Field.

Basso’s game-winning goal, assisted by fellow sophomore Jenna King (Millersville, Md./Severna Park), capped a comeback that saw the Bullets (17-3) overcome a 7-3 second-half deficit to advance to the third round of the NCAA Tournament.

Gettysburg will face the winner of Sunday’s game between Denison University (11-6) and No. 14 Catholic University (14-4) next weekend at a site and time yet to be announced.

Gettysburg’s 39th NCAA Tournament victory extends the careers of Head Coach Carol Cantele and Associate Coach Barb Jordan to at least next weekend’s regional round. Both coaches are retiring at the end of the season while eyeing the program’s fourth national title.

The Maroons (16-5), an at-large selection from the Old Dominion Athletic Conference who routed Bryn Athyn College in first-round action on Saturday, 23-4, countered the Bullets’ early goal with the next five markers to claim a 5-1 advantage with nine minutes remaining in the second period.

Basso and freshman Sophie Smith (Great Falls, Va./Langley) sandwich goals around a Roanoke tally to close the second stanza, trimming the Maroons’ advantage to 6-3 at halftime.

Following the break, Roanoke extended its lead to 7-3 with a goal just under a minute and a half into the third quarter, but the Bullets got goals from Fullowan, Basso, and junior Kelly O’Connor (Livingston, N.J./Livingston High School) in the final 5:45 to pull to within one at 7-6 heading into the last period of regulation.

The Maroons scored first in the fourth quarter to hold an 8-6 edge with 13:45 remaining, but sophomore Caroline Sullivan (Fairfield, Conn./Fairfield Ludlowe) again brought the hosts to within one with an unassisted marker with 4:53 showing on the clock.

Three minutes later, King set up O’Connor’s second goal of the game to level the score at 8-8.

Sophomore goalkeeper Gill Cortese (Mount Laurel, N.J./Lenape) came up clutch down the stretch, making a pair of saves on free-position shots before turning aside another shot with six seconds remaining to send the game into overtime.

Sophomore Regan Rightmire (Downingtown, Pa./Downingtown STEM Academy) collected the ensuing draw control to give Gettysburg possession. King then found a cutting Basso, who fired home the game-winner to send the Bullets to the third round.

O’Connor had two goals while King added a pair of helpers which came on the game-tying and game-winning goals.

Cortese finished the afternoon with six saves to earn the win, improving her record in net to 9-1 on the season.

Senior Nora Janzer (Havertown, Pa./Haverford) contributed a pair of caused turnovers for Gettysburg, which won its 11th straight game and improved to 11-1 at Clark Field this spring.

Much like the final score, Sunday’s game was even statistically, with both teams attempting 20 shots while being credited with 15 groundballs apiece.

Gettysburg forced Roanoke into 26 turnovers while giving the ball away 15 times. That plus-11 turnover differential helped offset the Maroons’ 15-7 advantage in draw controls.

Kyleigh Chickering made seven saves in the loss for the Maroons.

More information about Gettysburg’s third-round game will be available in the upcoming days.

This story was originally published here. 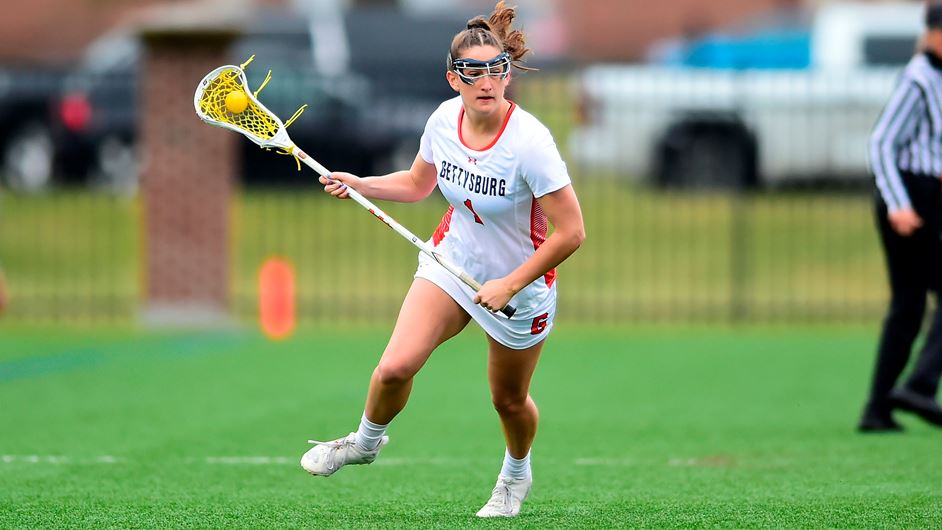 Featured image caption: Sophomore Jordan Basso’s third goal of the game was the overtime game-winner on Sunday vs. Roanoke.

No. 4 Gettysburg Rallies For Thrilling, 9-8 OT Victory Over Roanoke in NCAA Second Round

by Charles Stangor, Gettysburg Connection
May 15, 2022