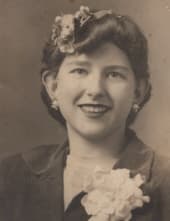 She was born June 1, 1930 in Walkersville, MD the daughter of the late Ray M. and Edna B. Wilhide Baugher. She was the wife of 57 years to the late Oran Lawrence Bancroft who died in 2007.

She was the beloved mother to; Kitty M. Eader of Damascus, MD, Carol A. Bancroft of Westminster, MD, David L. Bancroft of Fairfield, PA. She was predeceased by a daughter, Faye E. Bancroft. Betty was the oldest of 9 children, survived by one sister, Lily P. Crebbs. Betty will also be very missed by 8 grandchildren, 15 great grandchildren, and a number of nieces and nephews.

A Memorial service will be held at a later date. Online obituary and condolences available at monahanfuneralhome.com.