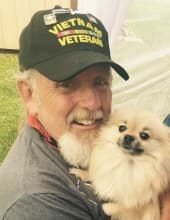 He was born July 27, 1951 in Williamsport, PA the son of the late Walter and Catherine Scott Morrison, Sr. Leonard was predeceased by his wife, Karen Morrison, and his three sisters Violet (Cookie), Lettie, and Annie.

Leonard was a veteran of the US Army, he served in Vietnam. He loved watching the Baltimore Ravens, drinking coffee, and going to the veteran clubs. He was a member of the V.F.W of Littlestown, Hanover American Legion and the Hanover AmVets.

A Memorial service will be held Tuesday, September 14, 2021 at 2:00 PM at Monahan Funeral Home, Gettysburg followed by full military honors. The family will receive friends at the funeral home on Tuesday from 1:00 PM until the time of the service. In lieu of flowers memorial can be made to Pennsylvania Wounded Warriors, 1117 Country Club Road, Camp Hill, PA 17011. Online obituary and condolences available at monahanfuneralhome.com.