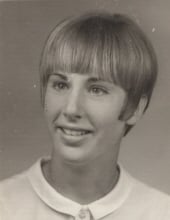 Born November 8, 1949 in Lancaster, PA she was the daughter of the late Joseph and Mary (Bender) Carl. She was the wife of John D. Hartman, of Gettysburg to whom she was married to for 50 years.

Mrs. Hartman worked for many years as a bank teller at the former Bank of Hanover, and then acquired by PNC Bank. She was a loving and devoted wife and mother, and loved her family and friends. She enjoyed rooting for Philadelphia sport teams, vacationing at the Jersey shore, antiquing, and taking care of the many cats she owned throughout her life.

In addition to her husband, Nancy is survived by her son, John C. Hartman, of Enola, PA and her brother, Joseph Carl, of Redlands, CA. In addition to her parents, she was preceded in death by her sister, Mary Beth McCollough.