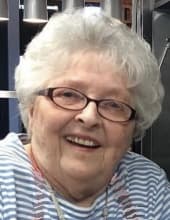 Nancy M. Kranias, 85, of Gettysburg, passed into the arms of Jesus on Thursday, August 26, 2021 surrounded by her family.

Nancy was born April 27, 1936 in Biglerville, PA to George and Ruth (Decker) Heller. She was a 1954 graduate of Biglerville High School.

In her early years of working in Gettysburg, she met the love of her life, Thomas Tommy Kranias, a young Greek immigrant. They later married and built a life together, which eventually led them to opening Tommys Pizza and later also buying The Plaza Restaurant, both in Gettysburg. Tommy and Nancy worked side by side for many years, and while Tommy was often the star of the show, Nancy was always working in the wings and was equally responsible for the success of their restaurants. She was an accomplished cook of everything from PA. Dutch to intricate Greek dishes.

Together they raised two children, Catherine (William) Leedy, and Chris Kranias, both of Gettysburg. They had eight grandchildren which were her pride and joy. Wade and Drew Leedy, Nikki (Leedy) Bailes, Emily, Tommy, Alexis, and Sophia Kranias, and Adrianna Coscia. She is also survived by ten great grandchildren, and several nieces and nephews.

Funeral services will be held Tuesday, August 31, 2021 at 11:00 AM from Monahan Funeral Home with Pastor Andrew Geib officiating. Interment will be in Hampton Union Cemetery, New Oxford. There will be a viewing at the funeral home on Tuesday from 10:00 AM until the time of the service. In lieu of flowers, memorials can be made to the Adams County SPCA, 11 Goldenville Road, Gettysburg, PA. 17325. Online obituary and condolences available at monahanfuneralhome.com.