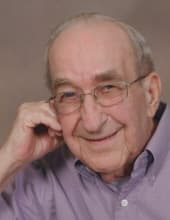 Pete was born December 21, 1932, in Chambersburg, the son of the late Walter B. and Alta M. (Spangler) Gelwicks.

After high school, Pete entered the Air Force and served his country, primarily as a Radio Operator from September 1951  August 1955. He left the Air Force with an honorable discharge, National Defense Service Medal and Good Conduct Medal. Pete completed 25 years of service with the United States Government as a Communications Operator. His career took him and his family to many destinations throughout the years, including Indonesia, South Africa, Dominican Republic, England, India and Greece. He retired from government work in 1983 and in his retirement he enjoyed reading, working puzzles, and spending time with his family.

Funeral service for the deceased will be held 11:00 AM, Tuesday, August 10, 2021 at the Monahan Funeral Home, 125 Carlisle St., Gettysburg, PA. Burial, with full military honors being presented by the Adams County Allied Veterans, will be in the St. Ignatius Cemetery. The family will receive friends from 10:00 AM until the time of the services Tuesday morning at the funeral home. Online condolences may be made at monahanfuneralhome.com.