Sandra Kay (Geagley) Reed of Providence Place in Chambersburg, PA, left this world and into the loving arms of her Lord and Savior. She received her Angel Wings on Mothers Day, May 8, 2022 after a long battle with Alzheimers Disease. 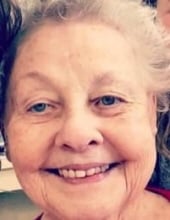 She was surrounded by the love of all her family for several days prior to leaving us but not without showing us how much strength and determination she had to support us first.

They soon moved to Washington, DC where her father was a printer with Judd and Deitwieler which provided work for National Geographic. Her mother was the Executive Secretary to the Director of Commerce on the Hill in Washington DC. They also managed the office at Wallace Memorial Presbyterian Church on Riggs Road in Hyattsville raising their family in a strong Christian faith and providing services for the church.

She was sister to first Ronald P. Geagley and then to twin sisters Vivian and Lennea. During this busy family raising, they were dearly cared for by her cousin Mary Geagley who also gradually cared for the grandchildren as well.

Sandie married Vernon in 1957 and had her first child in 1959, second child in 1962 and third child in 1965. They moved from DC to Munson Street in Wheaton, MD until 1969 when she and Vernon accepted positions to manage(Sandie) and engineer(Vernon) an apartment complex in Seabrook named Carleton East. After many years with Carleton East, she accepted an offer to go into Commercial Property Management while Vernon remained engineering the residential property where they resided. She managed many properties beginning with Washington Square in DC with Lerner Enterprises, Charles E. Smith in Crystal City, Foulger-Pratt, Cafritz Management and ending her career with JBG Smith on Florida & Connecticut Avenues in DC where she took pride in her window dressings, elaborate 4th of July rooftop celebrations for her tenants and the Christmas Angel Tree Program. She was awarded the 1997 Property Manager of the year award. She and Vernon then moved to their retirement home in Gettysburg, Pennsylvania where she shared her love for many, many ,many, many, yard sale visits.

Her love for family was top priority, she simply adored her children, grandchildren, and great grandchildren. She would never turn down an opportunity to be available for cheering on sporting games no matter how far she had to drive. She was never too busy to listen when her children or grandchildren were in need, and she was always to the rescue.

Her favorite things: Singing at church and in choir, watching the birds eat away at seed outside her window, REESE CUPS!!, Frank Sinatra, Patriotism, her love of fashion and jewelry, shoes and shoes and more shoes, Redskin games, playing and listening to the piano and her favorite song the Great Pretender.

Mom would love donations be made to Alzheimers.org. in lieu of flowers in her memory. You may do so at the provided link: https://act/alz.org/site/TR/Events/Tributes-AlzheimersChampions?pxfid=744217&fr id=1060&pg=fund