At noon on Thursday June 4th, 2020 Ceasefire PA hosted a digital rally. Every year at this time, gun violence prevention groups observe Wear Orange weekend, honoring the memory of Hadiya Pendleton and all gun violence victims, now amounting to 40,000 people who die annually. Fifteen-year-old Hadiya was a top student who was shot in the back in drive-by gang violence in 2013 in Chicago. Her friends began to wear orange, her favorite color, in her memory on her June 2nd birthday every year. Now all across America orange is worn on the weekend following Hadiya’s birthday. In June 2020, while Ceasefire and other groups held digital rallies, others rallied in person in memory of George Floyd, victim of systemic racial injustice that lead to his death. The two causes are connected. At the June 4th rally, Senator Casey reminded listeners that in Philadelphia gun violence is ‘the leading cause of death for African American men from the ages of 15 to 34.”

In the US women and children also die in domestic gun violence at many times the rate of other nations. Law enforcement officers in PA also die in disproportionate numbers because of the failure to pass legislation to close a loophole that allows felons and others to buy long guns without a background check, in “private sales.” And two-thirds of all US gun deaths are gun suicides, taking older white men from us in disproportionate numbers. On Wear Orange Weekend, Ceasefire PA and other groups remind the country that it doesn’t have to be this way. Gun reforms like universal background checks and Extreme Risk Protection Orders demonstrably save lives wherever they are enacted.

Senator Casey pointed out that among federal legislators in D.C. however, gun violence is not only being ignored—“some politicians have surrendered to the problem.” But the Senator declared that “surrender is un-American.” He asked what would have happened if we had surrendered to the 3rd Reich, or to the great depression, or to the recession of 2008? Instead, Senator Casey called on Pennsylvanians to “stay on the march, and to focus on what counts” in working to end gun violence. Voting is one thing that counts. The Senator stated his belief that this coming November will be “the most important election since 1932.” 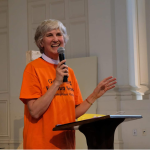 Judy Young is a retired United Methodist pastor. She convenes Gettysburg for Gun Sense and the Adams County branch of the PA Prison Society, and helps to reenact Abolitionists and plan the annual Abolitionists Day in Adams County.

SPONSORED
We'd value your comment on this post. Please leave one below or send us a note. Comments without a first and last name will not be approved.