In the summer of 1958, I had just turned sixteen when Ralph and Emmy Tyson—friends of our family—asked me to come along with them and their children, John and Linda, to Cape May, New Jersey for the Philadelphia Friends (Quakers) Annual Yearly Meeting.

Cape May was a rundown beach town when we went there.  Grey was the predominant color of the buildings, inside and out.  There were old boarding houses everywhere, with one big hotel where the main conference meetings were held.  The families stayed in the boarding houses; the rooms were spare and the water from the spigots was brown and smelly.  John and Linda and I spent a lot of time going from our rooming house to the beach and back again, running up and down the steps to our rooms.   We might have gone to workshops for kids, but I don’t remember.  There weren’t attractions on the boardwalk, so we spent hours at the beach. I had also met a guy from Philadelphia: tall and cute, well-mannered, with a fancy name: Proctor Lippincott!  Perfect for a 16-year-old from the outback of Pennsylvania!

The last night of the conference the adults were really excited because the keynote speaker was a man who was a minister from the South. I knew nothing about him.  All I knew was when he began speaking, people around us were taking notes*, which I found strange.  Little did I know: the speaker was Martin Luther King, Jr.

After the speech, we took a walk on the boardwalk, and were coming back to the Convention Center. Martin Luther King was also walking on the boardwalk and my friend asked if I’d like to meet him; I said sure, so I was introduced to this quiet, polite man, not much taller than I was.  He shook my hand, I hope I thanked him, and we walked away.  I think I was in shock, now realizing that this man was something special (he’d gotten a standing ovation after his speech). When I came home, my parents were thrilled for me but I didn’t tell anybody else because first of all, it was upper Adams and nobody had heard of Martin Luther King.  Second it was an area which had only seen migrant farm workers who were Black, so friends probably wouldn’t understand my excitement. And it was my secret; not a secret really, but my memory.

My sister looked up Proctor Lippincott recently.  He’s died.  I don’t know if he did good works or “made good trouble” during his life.

I’m a member of Menallen Friends Meeting in Upper Adams County now—Ralph and Emmy’s meeting.  The first time I was in the meeting house was for Emmy’s funeral.   During my life I’ve tried to do good works.   Sometimes, I feel that I’ve done a little, like when our meeting offered English as a Second Language to Spanish-speaking farm workers.  Was I led to this path by my chance meeting in Cape May?  Maybe.

*from The Inquirer, June 27, 2018: “Social progress does not roll in on the wheels of inevitability.  It comes only through persistent work and the tireless efforts of dedicated individuals.” -Martin Luther King, Jr, at 29 years old.  These words are on a plaque on the old Convention Center in Cape May, NJ. 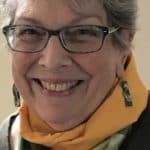 Judy Pyle grew up in Adams County, taught Art in Gettysburg Area High School until her retirement in 2001. She is a graduate of Moore College of Art in Philadelphia. She holds a Masters of Liberal Arts degree from McDaniel College in Westminster and a Certificate in Jewelry Making from MICA in Baltimore. She shows with Foothills Artists in Adams County, and her work can be found at The Village Artisans in Boiling Springs. She is a member of The Enamelist Society and the Enamel Guild North East. Her artwork has been accepted in various national shows. Her latest work references The Distelfink Drive-In. www.judypyle.com

This author does not have any more posts.