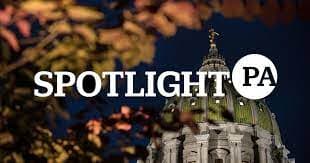 HARRISBURG — Doug Mastriano is the projected winner of Pennsylvania’s Republican primary for governor, defeating a crowded field in a high-stakes race that will shape the state’s future.

Unofficial election results show Mastriano, a state senator from Franklin County, with 43% of the vote as of Tuesday at 10 p.m. The Associated Press called the race with an estimated 50% of the votes counted.

In November, Mastriano will face Democrat Josh Shapiro, Pennsylvania’s current attorney general who faced no opposition from members of his party.

Mastriano emerged from a crowded GOP field of nine candidates who have spent the past several months crisscrossing the state to rally support among party elites and the rank-and-file alike.

In the leadup to May 17, establishment Republicans attempted to stop Mastriano from winning, fearful that his rhetoric would drive away moderates in the general election. Two candidates dropped out and endorsed former U.S. Rep. Lou Barletta (R., Pa.), who often placed second in the polls. Other top contenders, such as former U.S. prosecutor Bill McSwain and Delaware County business owner Dave White, resisted calls to back down.

At stake in November is the governor’s mansion, open because incumbent Democratic Gov. Tom Wolf is term-limited from running again. As the state’s chief executive, the next governor will have the power to sign into law — or block — changes regarding marijuana, voting rights, property taxes, and abortion.

The governor also presents a spending plan each year that proposes how billions in tax dollars are used, directs state agencies to take far-reaching regulatory actions on the environment and public health, and oversees tens of thousands of state employees, from public benefits caseworkers to correctional officers.

A bombastic speaker who sprinkles his stump speeches with historical and Biblical references, Mastriano, a retired Army colonel and Gulf War veteran, is a favorite among grassroots conservatives and evangelicals.

He appeared at or near the top of polls before the primary, despite raising just $1.6 million since the start of 2021 — near the bottom of the nine-person GOP field. Much of that total came from small individual donations, while potato roll magnate Jim Martin gave more than $100,000.

First elected to the state Senate in a 2019 special election, Mastriano started his time in Harrisburg as a conservative backbencher, best known for sharing Islamophobic memes on his campaign Facebook account and sponsoring a six-week abortion ban.

His profile began its meteoric rise in 2020, as the COVID-19 pandemic shut down the world.

At first, he appeared somewhat supportive of mitigation efforts — even proposing legislation that would let public health officials release the names of people who tested positive for the coronavirus. But after a few weeks of lockdowns — ordered by the Wolf administration to prevent hospitals from becoming overwhelmed — Mastriano began railing against Wolf in daily Facebook videos and later at Capitol rallies opposing the pandemic response.

Those videos and events earned him a dedicated fandom that, by the summer of 2020, was calling for him to run for governor.

At first, Mastriano downplayed his ambitions, telling two evangelical podcasters with ties to the QAnon conspiracy theory that he’d only run if he received “God’s calling, the people … compel us to go forth, and we have the resources.”

In since-deleted tweets, Mastriano used QAnon phrases, and was twice scheduled to appear at a conference with the podcasters. He backed out in 2021 after news reports highlighted the event’s ties to the conspiracy theory, which claims that global elites and Democrats engage in Satanic behavior, but he appeared at an event organized by the podcasters last month.

After the November 2020 presidential contest, Mastriano conflated mail ballot totals from the primary and general elections to falsely claim more had been returned than requested. He also claimed it was “mathematically impossible that three out of four ballots would go for one person” when mail ballots, disproportionately requested by Democrats, began to be tallied. Mastriano has won his own legislative elections by similar margins.

To amplify these claims as well as Trump’s false allegations of widespread voter fraud, Mastriano hosted a taxpayer-funded meeting at a Gettysburg hotel marked by “mostly false, misleading, and mistaken testimony,” according to an analysis of the testimony by The Caucus.

Mastriano’s fight to overturn President Joe Biden’s election win culminated on Jan. 6, 2021, when he booked buses to bring supporters to Washington, D.C. for the Trump rally that preceded the insurrection.

At the time, Mastriano claimed he didn’t cross police lines or enter the U.S. Capitol, but video later emerged that showed him moving with the mob past those barriers.

He has been subpoenaed by the congressional committee investigating Jan. 6, which said in February that Mastriano “was part of a plan to arrange for an ‘alternate’ slate of electors from Pennsylvania for former President Trump and reportedly spoke with President Trump about post-election activities.”

Overall, Mastriano has pushed back on any questions about his past actions or who he associates with, part of his broader antipathy to the mainstream press.

“I resent the fact that you want to castigate anyone who went down to Washington, D.C. on Jan. 6 as some kind of enemy of the public,” Mastriano said in an interview with the conservative-leaning Delaware Valley Journal this month. “That is dangerous. You’re talking like an East German there.”

Since Jan. 6, Mastriano has continued to focus on unproven election fraud. He was originally tapped to lead the state Senate’s investigation into the 2020 election but feuded with Senate President Pro Tempore Jake Corman (R., Centre) over the scope, direction, and speed of the effort. In response, Corman removed Mastriano from his leadership role and gave it to a colleague.

Along with his Trumpian election rhetoric, Mastriano has proposed bills that would repeal no-excuse mail voting — which he voted for in 2019 — ban vaccine mandates, and regulate social media companies.

He also supports banning on abortion with no exceptions, as well as expanding natural gas drilling and access to private schools and charter schools using taxpayer funds.

He has promised that as governor he would issue executive orders on his first day in office to ban “critical race theory” — a concept often taught in law schools that has become a catchall term for curriculum on racism — and to bar trans women from playing women’s sports. He has also suggested he would deploy the Pennsylvania National Guard to Philadelphia to fight crime “as a last recourse.”

Shapiro, who has held elected office at the local or state level for the past two decades, ran unopposed in this year’s primary.

As attorney general, he made international headlines in 2018 when his office released a scathing grand jury report that exposed how nearly every Catholic diocese in the state engaged in a decades-long cover-up of child sexual abuse by clergy.

The investigation was repeatedly described as the nation’s most sweeping inquiry into sexual abuse of children in the Catholic Church. It involved more than 1,000 victims, 301 “preedator” priests, and dozens in the church hierarchy who knew about the abuse but buried it to shield the institution.

Shapiro’s time as attorney general has also been marked by his legal fights against some of the Trump administration’s high-profile policy changes, including efforts to roll back the Affordable Care Act’s birth control coverage mandate.

Along with other attorneys general around the country, Shapiro negotiated a multibillion dollar settlement with a major pharmaceutical manufacturer and distributors over their role in fueling the nationwide opioid crisis. Pennsylvania’s share of the settlement stands at $1 billion, money that’s to be used for opioid remediation programs and initiatives.

Shapiro began his career in government in the 1990s, working for a member of Congress and two senators in Washington, D.C. He was elected to Pennsylvania’s House of Representatives in 2004, where he served four terms representing parts of Montgomery County in the Philadelphia suburbs.

In 2011, he won a seat on Montgomery County’s Board of Commissioners in a year when Democrats took control over the three-member panel for the first time in the county’s history. He was elected attorney general in 2016 and again in 2020 for a second, four-year term.

In announcing his candidacy for governor last year, Shapiro, who has built a reputation as a tireless campaigner and prolific fundraiser, quickly cleared the field — despite some talk early on that he would be challenged by a more progressive Democrat.

Running unopposed gave him an instant advantage over the crowded, nine-way primary field of GOP contenders. He has amassed more than $20 million in campaign contributions since the start of 2021, eclipsing fundraising on the Republican side.

He is entering the post-primary landscape with nearly $16 million on hand, largely because he was not forced to spend his war chest edging out competitors.

Contentious races for an open U.S. Senate seat were also on the ballot Tuesday.

Fetterman had a pacemaker implanted on Election Day after he suffered a stroke last week.

As of 10 p.m. Tuesday, the Associated Press had yet to declare a Republican winner. The crowded field is being led by former hedge fund CEO Dave McCormick and celebrity surgeon Mehmet Oz.

by Spotlight PA, Gettysburg Connection
May 17, 2022