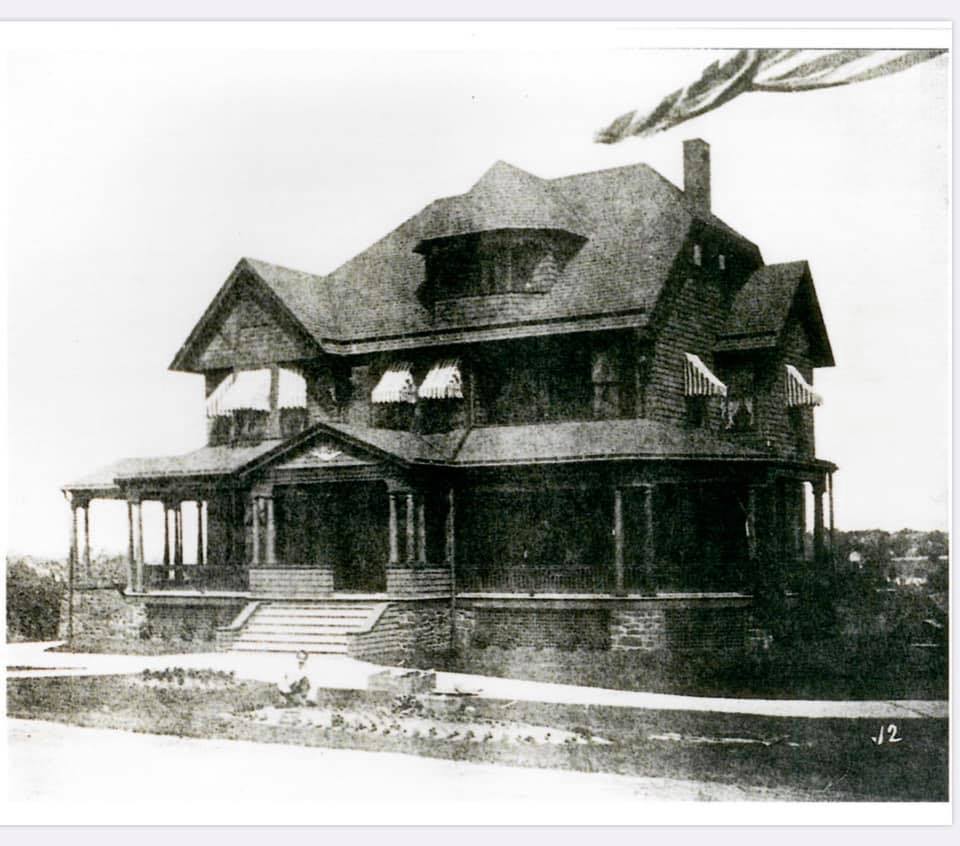 Gettysburg native Stephanie Shaara and her husband, well known historical author Jeff Shaara, are tackling an enormous project that will restore a 120-year old home to its original glory.

The historic home known as “Red Patch,” which sits next to the former Gettysburg National Guard Armory on Southwest Confederate Avenue at the top of Red Patch Avenue in west Gettysburg, towers over the neighborhood below and provides views across the borough to the round tops.

The prior owners, Gail Prezioso and her late husband Sal, bought the house in the late 1990s. When Ms. Prezioso sold the house to the Shaaras, “she left behind an enormous collection of Italian travel and art books that we’re donating to Gettysburg College. There were nearly thirty cases of Civil War books that we have donated to the Adams County Historical Society, and at least ten cases of books have been donated to the Adams County Library,” said Stephanie.

The most recent renovation was by Sharen and John Miller, who owned the house between 1985 and 1997. “The look of the house today, the paint and carpet, and the layout of many of the bedrooms were by the Millers. They did a beautiful job of restoring the home, but now it’s time to do it again. Our goal is to restore the home to its appearance in 1900, when it was built,” said Stephanie

“The things we threw away were not historically relevant, and were certainly not part of the original home. We have given away anything that was salvageable and worthy of donating. A collection of civil war prints has gone to the American Battlefield Trust,” said Stephanie.

Stephanie met her husband when she was managing the Greystone History Emporium on Steinwehr Avenue in 1994. “Jeff was just starting his writing career, and had come to town for the release of the movie ‘Gettysburg’ on video. As the years passed, he would visit Gettysburg every summer for book signing events, and we became friends,” said Stephanie.

Construction on Red Patch was started by Union Brevet Major General H.T. Collis in 1898, based on a design of a house in Somerville, NJ. “We have a copy of the January 1894 edition of ‘Carpentry and Building’ magazine featuring the house in Somerville as well as the original contract between General Collis and his local Gettysburg builder, Merville E. Stallsmith,” said Stephanie. “The house was started in 1898 and completed in 1900. General Collis died in 1902.”

Collis is buried in the Gettysburg National Cemetery. “He has a large white marble marker and the bust of him faces Red Patch,” said Stephanie. “Collis referred to Red Patch as his summer home and club house. Supposedly he had some interesting guests and big parties.”

The house has had several owners, including Elmer Dillman, who used the house as an antique store until 1975. Stephanie remembers shopping there with her father, and her parents still own a few antiques purchased there. When Mr. Dillman died, his family sold the home to the National Park Service, who owned it until 1985.

Jeff and Stephanie intend to restore the house to its original look with clapboard siding on the ground floor and shingle siding on the second and third stories, while also modernizing the interior.

The work will be done by Shawn Smith, owner of the local construction company Knight Builders, Inc. “I’ve known Shawn since high school, and he built a home for us several years ago,” said Stephanie.

Construction will include a new roof, siding, windows, kitchen. and bathrooms. The front porch will be rebuilt and the railings will be replaced. The stone foundation will be repointed and the colors of the original house will be used. The original pine floors throughout the house will be sanded and preserved, and the four original fireplaces will be restored.

“We’ll keep the loop driveway, adding a pebble surface that will be more period,” said Stephanie. “We have a photo of the house from 1900. That will be the look of the property. We’re hoping that when the work is completed, that it will not only be our home, but will also be included on the National Registry of Historic Places. Red Patch deserves that,” said Stephanie.

The attic will be converted to Jeff’s office space and library. The space has original wood beams, a tall peaked ceiling, as well as windows and a balcony with a spectacular view of the battlefield.

The Shaaras have been living close to Philadelphia for the past two years, but when Stephanie saw the home listed for sale on realtor.com they knew it was the right thing to do.

“It’s a piece of land that’s significant to the town and the battlefield. The Millers added so much to the home, but not much has been done since then. It needs some TLC. Maintaining the historical integrity of the home is the highest priority for us. But it will also be our home. I think General Collis would be happy,” said Stephanie.