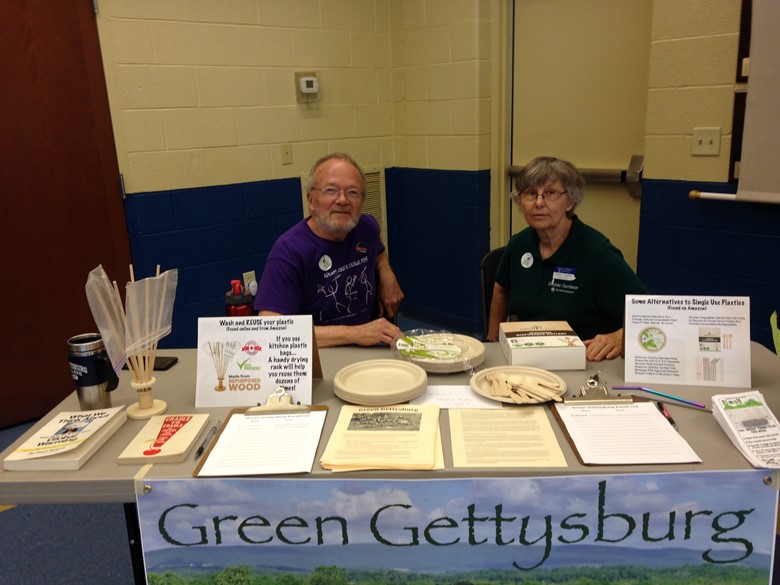 Green Gettysburg Book Club convened last February 14, Valentine’s Day, with about thirty members on our list and has continued since with about fifteen members participating actively each week and others following along on Facebook.

We got to meet about five times in person, but now with the pandemic we’ve shifted to Zoom and continue meeting regularly there.

Green Gettsyburg Members Will Lane and Debby Luquette at the Green Gathering, 2019

Secondly, we see ourselves as participating, right here in our home county, in a major cultural shift in the way we think about our relationship with the natural world, helping to move from a model of domination and exploitation to a recognition of our interdependence with the natural systems that sustain us. Along with the science, we are committed to exploring alternative ways of understanding nature and our relationship with other living things.

These two, different goals actually support each other in important ways. Science without empathy can sometimes go astray. Emotion without a solid grounding in careful observation and science can become sentimental and lead to bad decisions. But like most people in these challenging times, we are also looking for the spiritual nourishment and emotional comfort that can come from a more open, more personal relationship with the natural world.

“Biophilia,” the love of other living thing, is an important word for many of us. First coined by the ant scientist E.O. Wilson, the term refers to an inborn love of nature that he asserts is part of our evolutionary heritage. For us, it’s a love worth cultivating since as one of our members has said, we are not likely to act effectively to save something we do not already love deeply. Pope Francis, with his emphasis on environmental stewardship and respect for the intrinsic value of all living things is another source of inspiration for many.

Our first selection, What We Think About When We Try Not to Think About Global Warming, by Norwegian Per Espen Stoknes took us deep into the dynamics of climate change denial. We learned, among many other things, that “identity eats reality for breakfast” time after time. By this Stoknes means that the things we believe depend as much or more on what our friends and family believe as on the facts of the matter. Believing is really a social act and changing one’s mind can be painful and involve the loss of friends. But we also learned a great deal about the power of stories and new ways of framing a problem as tools for communicating a new perspective on climate change.

We learned to be careful about the way we frame information. What kind of story are we telling, one of doom and gloom? Or are we telling a story about a transition from outmoded energy sources to new economic development and a more stable foundation for human flourishing and the wellbeing of the natural world? Indeed, there are so many new stories worth telling: of green economic development, of human well-being through an ethic of stewardship and the re-wilding of damaged habitats. Stories of a new culture in the making.

Currently, we are reading Braiding Sweetgrass: Indigenous Wisdom, Scientific Knowledge, and the Teachings of Plants by Robin Wall Kimmerer. As a botanist and college professor, a member of the Citizen Potowatomi Nation, and a mother raising two daughters, Kimmerer is able to weave together the scientific, the mythical, and the practical and in the end often let the plants themselves do the teaching.

We have learned the myth of Sky Woman, falling from above the clouds and establishing the first living things on the back of an ancient tortoise, inevitably contrasting this story with the western myth of Adam and Eve. We have learned about maple sugaring and the craft of making baskets from the wood of ash trees. Most importantly, we have pondered the power of gratitude as expressed in the Thanksgiving Address, a public prayer practiced by members of the Onondaga Nation.

As Kimmerer says, “…while expressing gratitude seems innocent enough, it is a revolutionary idea. In a consumer society, contentment is a radical proposition. Recognizing abundance rather than scarcity undermines an economy that thrives by creating unmet desires. Gratitude creates an ethic of fullness, but the economy needs emptiness. The Thanksgiving address reminds you that you already have everything you need.”

At the moment, we are about one-third of the way through Braiding Sweetgrass and welcome new members. More information about the Green Gettysburg Book Club can be obtained by writing [email protected].