As hundreds of high school senior athletes play in the last games of their career, it’s worth asking what they got out of their experiences. Is the emphasis on sports a distraction from school studies or does it provide a support system for many students’ passions?

According to Scholarshipstats.com, just over 7% of all high school student athletes within the nation go on to play competitively on the collegiate level. While that percentage is low, it certainly does not imply anything about the talent of the other 93% — many student athletes choose not to play in college on their own terms. 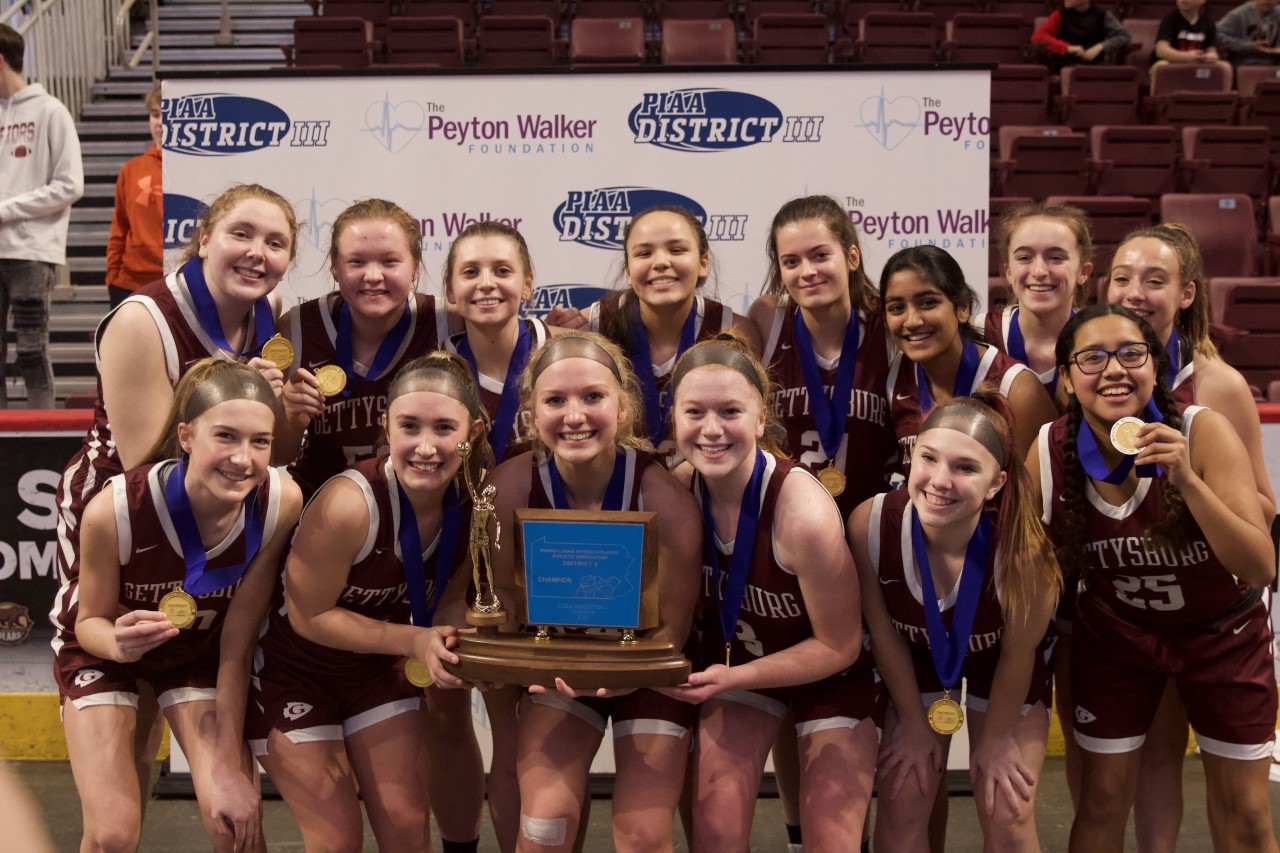 I talked with two local athletes — Gettysburg Area High School’s Briana Abate and New Oxford High School’s Hunter Crabbs – both of whom are not moving on to college sports, and one — Gettysburg’s Emili Scavitto, who is — to learn about their decisions for the future and how their athletic careers changed their lives.

Abate played power forward and was a team captain for the District III 5A championship-winning girls’ basketball team this past year. She has also been on the Gettysburg team all four years of her high school career where the team went to the district finals each year, winning a district championship her sophomore season as well.

Abate grew up in Littlestown and attended elementary and middle school within the district until moving to Gettysburg her freshman year. She has played basketball consistently for 13 years, and comes from a basketball family with her dad and siblings all playing in high school.

Excited to take her next academic step, Abate is currently on the college search, having just recently gone on a visit to Arizona State University.

“Arizona was amazing and I’m 95% sure I want to go there,” Abate said.

Abate has been accepted into ASU’s psychology program and is interested in pursuing a career in psychology.

“I just want to learn how the brain works, and how everyone individually works themselves out. I just think it’s so cool,” Abate said.

However when it comes to playing basketball in college, Abate made the decision to stop playing competitively.

“I have played basketball all year round since sixth grade, so I did AAU, and it’s just a lot. It’s just very tiring and it’s very draining physically, mentally, and emotionally. There’s a lot that goes into it, and I want to be able to enjoy my college life. So if basketball takes it up, I don’t think I’d be able to the way I want to,” Abate said. “Playing basketball would’ve been a huge decision for me and I just decided against it.”

Crabbs could thank his parents for his initial interest in sports and why he’s played so many.

“They were constantly signing me up to play different sports since I was old enough to play. My dad played DII basketball at Shippensburg and encouraged me to continue playing the sports I enjoyed the most. Playing in high school was a no-brainer because I love playing with my teammates and the competition,” Crabbs said.

Crabbs will be attending Millersville University as a technical and engineering education major, and he says his decision to attend Millersville is solely academic — it’s the only school in Pennsylvania that has his major.

“I have always known I wanted to teach. Both of my parents are teachers and I love school. I was unsure what subject I wanted to major in until my freshman year of high school where I had my first shop class and built a really good relationship with my shop teacher,” Crabbs said. “I really enjoy all aspects of the shop classes offered in our high school, so it was the obvious choice to pursue a degree in technical and engineering education.”

To focus all of his attention on his future degree, Crabbs decided not to play competitively in college, saying that he knows he will have the chance to play intramurals with less commitment, as well as participating in other interests.

“I am excited about that decision because there are a lot of other things I enjoy such as hunting and woodworking on top of playing sports, and I know that I will have time to enjoy these other hobbies without the major time commitment to a collegiate sports team,” Crabbs said.

Emili Scavitto, on the other hand, a member of the GAHS girls’ basketball team and teammate of Abate, will continue her sports career at Thiel College in the fall while majoring in speech pathology.

“[Speech pathology] is an interesting career field that helps many people who are struggling with speaking and swallowing. I hope to work with kids in either a pediatric outpatient clinic or in schools once I graduate,” Scavitto said.

Scavitto has played basketball for five years and kept at it for the competition and to play with her friends from middle school. She made the decision to play in college earlier this year when she was told she should think about playing.

“I was pretty late when it came to realizing that I wanted to play basketball in college. I actually had already decided that I wanted to go to Thiel based on my major, and then I decided in January hat I wanted to continue playing,” Scavitto said. “I was sitting in one of my coach’s classroom at my high school eating lunch and watching film with another player on my team, and she told me I should consider playing in college. It was at that point that I realized playing was an option and decided to pursue that idea.”

“In college I hope to be a well rounded student and athlete. I want to balance my time in order to be an honors student, and I also hope to be a strong offensive and defensive player for my college team,” Scavitto said.

All three students have had memorable experiences on their teams throughout high school. Crabbs said he remembered when, as a member of New Oxford’s basketball team, he and his teammates were able to beat Central York High School in the first game of the season. This marked the first time his class had ever beat Central York in basketball.

Crabbs gives credit to all the sports he has played and the teams he has played on for his development as a person and for providing valuable life lessons.

“I enjoyed every experience on every sports team I have played on throughout high school. All of them have taught me new things and have helped develop me and my character,” Crabbs said. “The frustrations and successes of every team have helped me grow as a person and I enjoyed every game and practice with my teammates and coaches.”

Abate and Scavitto’s most memorable moments are very similar: winning a district championship. The two teammates have played alongside each other for four years and have both experienced the team’s success together.

“My most memorable moment is winning a district championship this past year with my best friends,” Abate said. “My sophomore year, I played a little bit, but being a starter and a captain this year was just huge for me.”

“It’s an amazing feeling to be surrounded by your coaches, teammates, friends and family with a trophy knowing that all the work that has been put in for months has paid off,” Scavitto said.

Team chemistry is often very important and can help lead a team to a championship win. The GAHS girls’ basketball team has no shortage of chemistry and team camaraderie.

“I loved my teammates and they’re all very good people,” Abate said. “It’s a lot of fun and it’s good times. We create bonds and we hang out outside of basketball, so it’s really good and I loved it.”

“I was surrounded by the best group of teammates I could ask for. My teammates are also some of my closest friends, and spending so much time with them really helped build our relationships inside the sport and outside of it. Our team had a lot of successes, and we also had some tough losses. Through it all we stuck together and always worked hard to support each other,” Scavitto said.

The high school environment has been a rewarding and teachable affair for all three students. Crabbs described his experience as non-traditional due to having to miss time in school due to the COVID-19 pandemic. However, he notes how this made him appreciate actually being in school more.

“I have grown as a person through the relationships I’ve built, and the experiences I have gone through. There were a lot of late, stressful nights, but there were also a lot of fun times. I think that this chapter of my life has helped me to prepare for whatever the future holds for me,” Scavitto said.

With each student going through four years of high school and having different perspectives, they each have their own pieces of advice for student athletes. For those who wish to play a sport in college, Scavitto says not to sell themselves short and to believe that they can do what they set out to achieve.

As students who will not play competitively in college, Abate and Crabbs have words of wisdom for those in similar situations.

“Enjoy every minute because it is your last opportunity to play in a game that matters and you should treat it as such,” Crabbs said. “Leave everything out on the court or field because there is nothing for you to lose.”

“I get it completely. I just hope they’re able to enjoy whatever they do in their next step. Whether it’s school, the military, or just working,” Abate said. “I hope that they enjoy and hopefully still get to play their sport just for fun.” 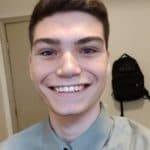 Hello! My name is Michael Donegan. I am currently a senior at Shippensburg University undertaking an internship at The Gettysburg Connection. I'm studying journalism with a concentration in electronic media and a minor in English. My interests and hobbies include sports (football, basketball and soccer to watch/tennis to play), videogames, reading, and I love to write in my free time. The internship gives me an opportunity to learn about Gettysburg and Adams County and I am always happy to learn new information.

by Michael Donegan, Gettysburg Connection
May 1, 2022