The parents of a 19-year-old Chinese American shot and killed by Pennsylvania State Police last December are calling for a new investigation into his death. 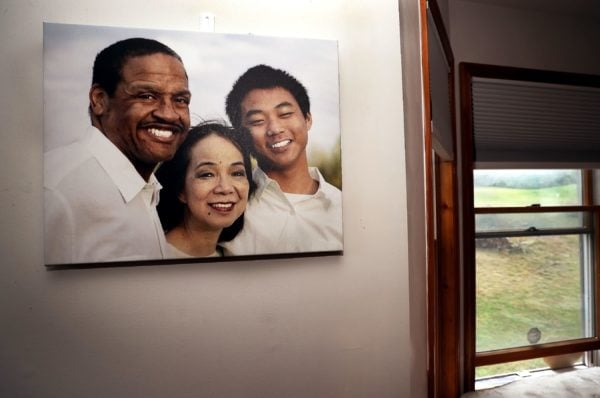 The request comes amid the release of new footage, obtained by Spotlight PA and NBC News from the family’s lawyers, that shows Christian Hall was shot with his hands in the air while holding a realistic pellet gun.

Here’s a summary of what you need to know about the case:

Who was Christian Hall?

Christian Hall was adopted from China as a baby by Fe Hall, who is Filipino, and Gareth Hall, who is Black and Latino. Christian told his parents he wanted to find his birth mother.

The Halls said that as a child Christian was diagnosed with reactive attachment disorder, which made it difficult to connect with his parents and interact with others. Still, he was close to his extended family and identified with Black and Latino cultures, his parents said.

At the age of 10, he accidentally started a fire in an empty room in a nursing home near his parents’ house. He was placed in a juvenile detention facility for four years for the incident.

After getting out he violated probation several times by running away from home, and spent much of his life until the age of 18 in juvenile detention facilities for the violations.

By December 2020 he had a steady job at a local grocery store and was working to pay back $14,000 in restitution he owed the state for starting the fire. He also had an on-again, off-again girlfriend.

What happened on the day he died?

Hall called 911 about a “possible suicider” on an overpass near Stroudsburg in northeastern Pennsylvania. When State Police arrived, they found Hall on the ledge.

Troopers tried to persuade him to get down, then saw he had a gun — later determined to be a realistic pellet gun — and backed away. They continued to try to persuade Hall to leave the gun on the bridge and walk to them.

After about 90 minutes, with both ends of the overpass blocked off, Hall started shuffling toward troopers with the gun in his hand. Troopers continued to tell Hall to put the gun down from behind their vehicles, and one fired shots at Hall, missing him, as he was standing roughly 70 feet away.

Video shows Hall raised his hands after the shots were fired, first to his sides, then above his head. He held the gun in one hand.

“If he doesn’t drop it, just take him,” a voice can be heard saying on the video.

Hall’s hands stayed above his head as two troopers fired several more shots. Hall was struck, clutched his stomach, and fell to the ground.

He was taken to a nearby hospital and pronounced dead.

Who investigated the shooting, and what did they find?

The shooting was first investigated by Pennsylvania State Police troopers from outside the local barracks. They turned their findings over to Monroe County District Attorney E. David Christine Jr., who ruled that troopers’ lives were in danger and therefore the shooting was justified.

Michael Mancuso, an assistant district attorney, called Hall’s death a “classic suicide by cop scenario” at a news conference in March. Mancuso said that Hall was an imminent threat from the time he put his hand on the gun.

Two accounts by State Police claim Hall pointed the gun at troopers, a potential justification for the shooting. But the video does not appear to show that.

The accounts by State Police and the DA’s office are inconsistent.

The State Police’s initial press release and one of several accounts in the district attorney’s written report state that Hall pointed the gun at troopers before shots were fired. A trooper said he watched Hall “bless himself, point to his head and then pull the gun from his waistband and point it in the direction of the Troopers.” A corporal then fired the first three shots, which appeared to miss Hall, according to that account.

Another section of the report and a video released by the DA examining the shooting make no mention of Hall pointing directly at troopers or raising the gun before the first shots were fired. After the initial shots, Hall “raises the gun outward toward his side and then upwards by bending his elbow at a ninety-degree angle,” that section of the report states.

Why are his parents calling for a new investigation?

Fe and Gareth Hall believe the Monroe County DA’s ruling was biased and that a new, independent investigation should be conducted.

They say that investigators peppered them with questions in the days just following the shooting when they were still in shock. After that, they said, they didn’t hear from authorities but would have answered questions.

They also point to Mancuso’s statements about Hall at the press conference, referencing his history in juvenile detention and repeating an unproven allegation that he used the pellet gun to rob people.

Finally, they say, the local district attorney works with the local State Police to make cases. They question how an investigation of people you work closely with can be unbiased.

Hall’s parents believe the district attorney wanted to protect the troopers involved. There was an incentive, they said, to paint their family as uncooperative and Hall as a criminal.

“The DA doesn’t have accountability to anybody,” Fe Hall said.

Who else could investigate the shooting? Will they?

In Pennsylvania, elected district attorneys are tasked with deciding whether or not to criminally charge police officers who kill people. The attorney general, currently Democrat Josh Shapiro, can review the case if the local DA believes there is a “real or apparent” conflict of interest. It’s nearly impossible for the AG’s office to get involved on its own.

That leaves the federal government to investigate. The Hall family lawyers, Ben Crump and Devon M. Jacob, have sent letters to the attorney general, FBI, and the U.S. Justice Department asking for a new, independent investigation. Shapiro’s office acknowledged it had received the letter but said it did not have the power to intervene.

The FBI and Justice Department also acknowledged receipt of the letters. The agencies declined to say anything else.

What you need to know about the killing of Christian Hall, 19, by Pennsylvania State Police