Despite being home to over 200 prisoners, the Adams County Adult Correctional Complex (ACACC) has not had a single case of transmitted COVID cases in the prison. That’s is a remarkable achievement, and a testament to the work of its staff, given many similar facilities have suffered major outbreaks requiring forced lockdowns.

The facility, located at 45 Major Bell Lane in Gettysburg, is charged with protecting and serving the residents of Adams County by providing progressive, comprehensive correctional and rehabilitative services to the inmate population. 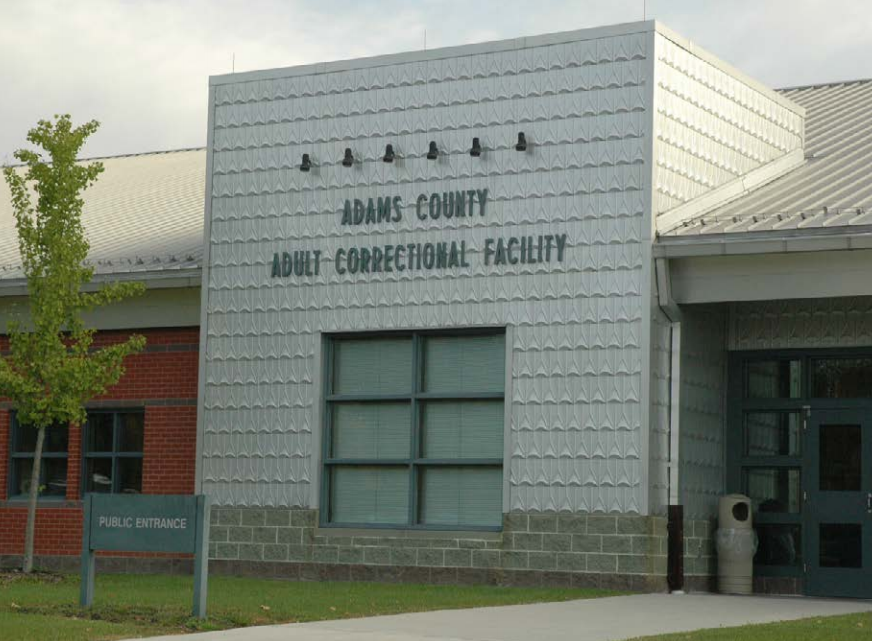 Warden Katy Hileman said that although the prison population has grown steadily since it opened in 2003, there was a reduction in numbers last year due to policies designed to mitigate the negative effects of COVID by reducing the number of prisoners. Most of the released prisoners were assigned to electronic monitoring in their homes.

“It was a mitigation effort. To keep people safe, some non-violent offenders were released to house arrest.” she said.

Hileman said those released during COVID were primarily elderly inmates who were more vulnerable and who require more treatment.

Hileman said the county and the prison board worked with her, the courts, the county commissioners, and law enforcement to develop the mitigation policies. “Without cooperation, we wouldn’t have been as successful. The prison board played a huge role in that,” said County Solicitor Molly Mudd.

One important change over the past year was the cancellation of all work release programs. “Reentry was closed because it was the largest risk to the public,” said Mudd.

Mudd said that there was no transmission of COVID due to implementing “the highest level COVID protocols” and the work of the warden. “She’s held up as an example of how this was done.”

The prison did have 5 prisoners who tested positive for COVID – but they were all transfers from other facilities and they did not spread the virus inside the prison.

“We focused on making the right decisions by taking advantage of protective measures to keep people safe,” said Hileman.

Acknowledging the situation was still in flux, Hileman said “We’re not quite back to the normal that everybody would like to be.  It’s very dangerous.  All it takes is one case and it’s wildfire. We had started planning before things really started. We are research and data driven.  We were paying attention to what was working and wasn’t. I still feel lucky.  We really focused on making the best decisions we could.”

“We never had a lockdown. We never had reduced congregation or time outside. We tried to balance mental health and well-being with protective measures. It all worked. The prisoners had a little bit of losses, but some facilities had 23 hour per day lockdowns.”

The facility is administered jointly by Hileman, two deputy wardens, two captains, as well as a director of business operations, a director of treatment services, and about 110 staff members.  A total of 137 positions have been approved for the prison.

The facility is overseen by the 7-member prison board composed of the County Commissioners, the President Judge or designee, and the District Attorney, Sheriff, and Controller. Meetings of the prison board are held online monthly and are open to the public.

Financially, the prison represents the largest slice of the county budget, coming in at about $14 million annually. “We’re trending a bit under this year, but historically costs have increased,” said County Manager Steve Nevada.

Saying the ACACC has 449 beds and houses both male and female inmates, Hileman said “the mission of the prison is to protect and serve the community with well-managed and effective programming, security, and best practices. We all care about the facility and the county very much.”

Hileman said the daily average number of prisoners is about 220, and the typical stay ranges from 38 to 65 days.

Hileman said the prison holds a variety of people including those waiting for bail hearings, those who have been sentenced to 1 to 2 year terms, and about 35-40 prisoners who are being held for U.S. Marshalls. Typical charges include failure to pay fines or costs, contempt cases, as well as DUI and drug-related offenses.

Hileman said prisoners are assigned to either minimum, medium, or maximum security procedures depending on their current and past charges, predicted propensity for violence, and where else they are wanted. Hileman said all prisoners have access to the same programs, including mental health care.

Hileman said the prison had passed each of these audits and reviews.

“It’s not an easy career. It can be difficult for new employees to adjust,” she said.

Like most other businesses, the prison is receiving fewer applicants and increases in the number of applicants who drop out during the pre-hire process.

Nevada said that many people who apply and go through the onboarding do not pass the screening process to become official employees.

“There is a nationwide shortage of correctional officers at the state and local level,” said Mudd.

Hileman said that staffing remained stable during the height of the pandemic. “Once the world started to reopen, there were several staff who left their employment, for a variety of reasons, which has led to an increased use of overtime to cover vacancies,” she said.

“We have enough staff now for the number of inmates we’re holding. We’re able to maintain and adequately handle our populations,” said Hileman, but added that the prison required both mandatory and voluntary overtime from its employees.

“The prison board is working with the numbers. Our average daily hold is low. By Order of the Court, re-entry is closed, and some non-violent offenders have been released on house arrest.  With fewer inmates, the facility can be safely operated with a smaller contingent of staff.  But, the county is putting many resources into recruiting and hiring correctional officers at this time, and will continue to do so until the facility is fully staffed,” said Mudd.

Hileman said the prison was working to increase its recruiting, including advertising using billboards around the area.

“Corrections is a challenging profession. Parents of young children are not going to consider becoming a correctional officer at this time because of the potential risk of transmitting COVID to their young children. We’re in the same boat as almost every other county,” said Mudd.