Over the past weeks, months, and years, the prospect of change has had residents of the Keystone State sanguine for a foretaste of better days to come.

It’s no secret the sudden changes in these last years have been strenuous for everyone and have taken their toll without regard for who you are — gender, ethnicity, geographic location, or other.

We’ve seen policies, mandates, restrictions, mass layoffs, inconsistent educational adjustments, suppression of amendments, federalization of corporations, spending bills higher than many can count, among many other issues, most of which, many of us never dreamed we’d see happen in modern America.

If you’re like me, despite everything, you are probably rejoicing at the chance that you still “have a say” in how you live your life, an opportunity for your voice to be heard, and a platform to make your vote count.

You may also be wondering if the values and “worldview” of your friends, family, or neighbors — or even the person in line to vote ahead of you — have reevaluated what’s important to them in recent years. (I know I certainly have!)

In the interest of curiosity, I headed over to the Gettysburg rec park on Tuesday and talked to some of my fellow third ward voters. I asked what they had on their minds, how the last 2 years have influenced the direction of their votes, and what they are hoping to see as a result of the election.

I met a delightful Vietnam Army Veteran named George. During our short time together, George was a pure embodiment of an American proudly fulfilling his Civic duty. George had already been helping inform potential voters of a write-in candidate (Marty Qually) earlier in the day.

After returning for a brief break, he resumed his post with 70 more write-in information cards and, don’t you know, he had handed out 68 of them by the time we parted ways.

While I was with George, he showed respect to every individual he talked to, (whether they were courteous to him or not) by standing up to greet them as a display of his respect. You got to love him!

David Allison grabbed my attention by way of the shirt he was wearing, which read N•W•O (New World Order). Once he agreed to speak with me, I felt it was pertinent to ask what were the most important issues that led him to vote in today’s election. “Getting back to normal,” he replied as he entered the building to cast his ballot.

I talked to a woman who was willing to speak to me but only on the condition of anonymity. My question to “Jane Doe ” was, “What was the deciding factor that led you to vote for your candidate?”. Emphatically, Jane responded “I support a woman’s right to choose!”

I also had the honor of meeting Adams County Commissioner Marty Qually , who is running as a write-in candidate for state representative on the Democratic ticket. I asked Qually what qualified him to run for office and request my vote.

Qually’s first response was the best answer I’ve heard in a really long time; he replied, (nonchalantly mentioning his current position in office), “I intend to be the change we need in PA by filling my duties as an elected official who puts people over party and is actually willing to represent his constituents.”

I asked Qually if he believes in the integrity of Pennsylvania’s voting system after the 2020 Presidential Election. Instantaneously, Qually answered my question before the words were finished leaving my mouth. “Absoluetly, 100 percent!,” he said.

Commissioner Qually, if you’re reading this article, you have at least one local resident who appreciates your views and is grateful to have had the opportunity to meet you in person.

While I can’t wholeheartedly say I agree with all the opinions expressed, as an American I believe it is our civic duty to support and defend the right to disagree and everyone’s right to free speech.

Good luck to all of the candidates and may we all hope the victors embody the true spirit of Pennsylvania and its people. 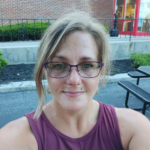 Hello, my name is Holly Weaver. I was raised by two United States Marine Corps sergeants in West Chester Pennsylvania. I am a wife and a mother to four children. I try to live by and teach my children that while every day may not be good, there is something good to be found in every day.

by Holly Weaver, Gettysburg Connection
May 19, 2022