I’m still yearning for more local conversation about what we’re gonna do to take care of ourselves from now on, primarily here at the local level (i.e., within reach of what each of us can do personally), but very much in sync with larger efforts.

I just heard a general in the U.S. Army Reserves on today’s Radio Smart Talk. I had no idea there was such amazing logistical and operational genius available to assist with local planning–disaster response and beyond. (Not that our local service providers and business community aren’t doing a good job, just that their hands are fully occupied with plugging leaks in the dam right now, and I want to look beyond that.)

Here’s an article that explains what I’m thinking about better than I’ve been able to express it myself yet: https://medium.com/presencing-institute-blog/a-new-superpower-in-the-making-awareness-based-collective-action-83861bcb9859 Says it’s a 19-minute read.

Another article I keep thinking about is Thomas Friedman’s 2.25.20 opinion piece in the NYT, in which he proposes a Cabinet for the next Administration composed of former presidential candidates (from both parties!), each exercising his or her area of expertise to begin righting what’s gone wrong–a modern-day Team of Rivals: https://www.nytimes.com/2020/02/25/opinion/democratic-primary-candidates.html

As a concept, I think this is brilliant and want to do SOMETHING to get it into wider circulation. Can you imagine if the alternative to 45 at the next election were actually a coordinated, collaborative vision of ways to put us back together again–ways that make sense and serve all of us?

Uncle Joe might be up to leading a team like that. I’d feel better if he left most of the policy-crafting to the other minds, but he’s probably a pretty good schmoozer and conciliator. Not a Lincoln, but we’ll take what we can get. 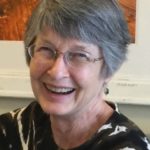 Carolyn George first acquired an Adams County address in 1978, even though USPS didn't list the mythical land of "West Orrtanna" in its zip code directory. Carolyn's background includes a twenty-three-year stint as Director of the Catholic Charities Counseling Office in Chambersburg, operating a forklift at Knouse Foods for eight years, and seven years of cleaning up after the public in her pre-retirement "geezer gig" as a custodian at the Gettysburg National Military Park Visitor Center. Since retiring from there in 2020, Carolyn has been reveling in her volunteer involvement with the Adams County Farmers Market Association and several other wonderful local Better World organizations.