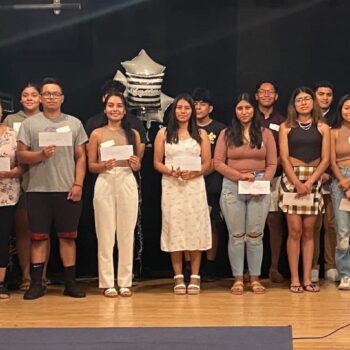 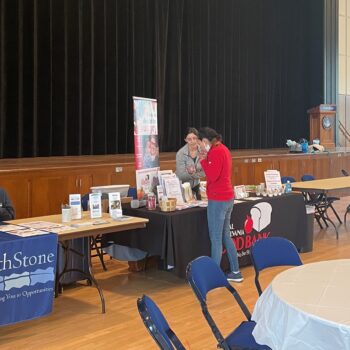 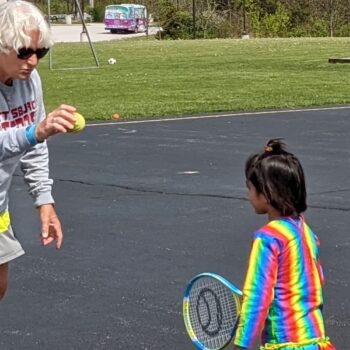 Hundreds of kids and family members covered the grounds around the Vida Charter School in Gettysburg this afternoon for this year’s Dia de los niños celebration.  The “kids day” event celebrated spring, the Cinco de Mayo holiday, the coming end of the school year, and a general spirit of happiness.  On hand were tennis lessons, musical chairs games, music, a bouncy house, family togetherness, and more. The event was hosted by Manos Unidas and Collaborating for Youth.

See information on the upcoming school year’s enrollment for the Adams County Head Start program below.

Manos Unidas is looking to hire a new case manager to work with families and individuals in our county. Look below for more information.

There will be an upcoming mobile COVID-19 vaccine clinic held at York Springs Fire Hall with the first dose of the Pfizer vaccine to be available on June 23rd, and the second on July 14th. Information about registering and walk-in times are available below.

On Saturday at about 2:45 p.m., event security in fluorescent vests assisted attendees as they crossed Main Street in Biglerville to the grassy field of the high school. A calm crowd of local residents were gathering waiting for the start of the Community Gathering for Healing and Accountability Event organized by the Racism at BHS group, which can be found on Facebook and Instagram. As music encouraging self-love and healing played, the crowd grew to approximately 80 people. Noteworthy were the large numbers of Lutheran Clergy in attendance.  LaRock Hudson, activist and spokesperson, announced the reason for the event was to create healing for the students and to hold the school accountable. He called for the school to “center the voices of the victims.” LaRock said the students do not call themselves a victim group, but that he calls them that because that is how he sees the students – as victims of child abuse. He also called for the school to make safe spaces for students to share their experiences and seek the appropriate resources for protection and healing.   Hudson prompted the crowd to take a sign from the front table and prepare for the march. The signs were handmade by students involved in the event. Signs read slogans such as “School is no place for hate,” “Admit it happened,” and “Racism is Violence.” Boaz Matlack, an activist and march leader, said a few words and led the high-energy crowd down Main Street where they paused at the intersection by the Biglerville 7-Eleven store. The crowd chanted “No excuse for child abuse,” “Racism doesn’t expire, Graham needs to retire,” and “No justice, No peace.” With a positive reaction from many commuters and town residents, the group made its way back to the event grounds for a presentation. In the opening lines of the presentation, it was noted that BIPOC (Black, Indigenous, and People of Color, pronounced Bi-pock) people do not owe it to anyone to share their accounts of racism. But the stories were ready and abundant.  For over an hour, past and present students’ written accounts of racism and abuse were read aloud by BIPOC people from the community. These experiences can be found on the Racism at BHS Facebook and Instagram page. Around the crowd were many teary, red eyes as well as the shaking of frustrated bowed heads. The stories were raw accounts from 1968 to present. Examples of stories heard: …[peer students told me to] “Go pick some apples you filthy Mexican”…, there were no repercussions for their words. ~anonymous Biglerville Student, 2012 …VoTech had a bomb threat called in…for at least a week, the kids harassed the only Muslim student saying “There wouldn’t be bomb threats if they didn’t let terrorists in!”; “She probably tried to 9/11 our school”; they yelled at her “Hey, towelhead!!” I never saw anyone do anything to help the girl. ~anonymous Biglerville Student, 2016 The incident that changed [my biracial daughter] forever was when there was a mass text message sent to all the students at the school. They called my daughter racial slurs. They said my daughter was a piece of excrement, that no one loved her, that she was born in a dumpster- They said her father and I never loved her. They said she should just kill herself. I went to the school and asked them for help, and they told me there was nothing they would do. My daughter was never the same, she never had the same spirit she once did. Her classmates were entertained by her pain, they laughed at the message and none of them were punished. She begged not to return to Biglerville school. Shebegged us. In 8th grade she transferred to Gettysburg, but it was too late. She dropped out shortly after because she was broken down mentally and her fighting spirit was diminished. She had gotten addicted to drugs in just seventh grade in Biglerville Schools to cope with emotional pain…my black daughter didn’t survive Biglerville school. My daughter died from a drug overdose in 2018…” ~anonymous parent of a student of color The words pierced the hearts of listeners, but the speakers continued. As two current students of color, both driven to tears and barely able to finish speaking, shared their experiences with the audience, the volunteer speakers stood with them showing solidarity and support. As the presentation came to a close, Biglerville High School student Teairra Wetzel read a collective statement from the students asking the audience to hear the cries of the students, “What if it was your child?” Event attendee Kristen Eyssell said “there are many of us in the larger community who have been horrified by these stories and we are here to support these children and young people in their efforts to get an education free from racially and culturally motivated hostilities.” When Wetzel was asked what can the community do to help you heal, her answer was simple, “Support us.”  To support the students, follow their social media pages for directives on change as well as information on upcoming events.

Join us for a community healing event at the Biglerville High School Parking lot on Saturday March 13, 3:00 p.m. to 5:00 p.m., to listen to survivors expose decades of racially motivated child abuse at Biglerville schools. Gathering at the Biglerville High School parking lot, we will listen to a collective declaration written by current students asking the community to demand accountability, creating a safe school for children of color. The group will march to pressure the school district to change and to start the healingprocess of survivors. The march will end at the Biglerville High School parking lot for a presentation where Black, Indigenous, and People of Color (BIPOC) from our community will read students’ accounts regarding racism and abuse experienced in Biglerville schools. Hear the pain, the passion, and the need for change from our community of color as they share their stories dating from 1968 to the present. We encourage previous students, current students, school board members, faculty, and all members of the community to join us in support of our youth of color to promote healing and demand change. Change starts with accountability.